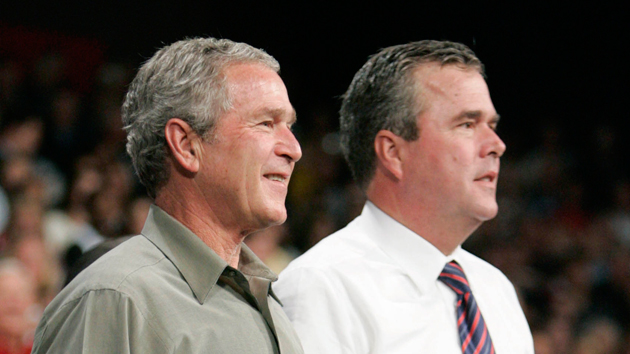 Last week, Jeb Bush stepped in it. It took the all-but-announced Republican presidential candidate several attempts to answer the most obvious question: Knowing what we know now, would you have launched the Iraq War? Yes, I would have, he initially declared, noting he would not dump on his brother for initiating the unpopular war. “So would almost everyone that was confronted with the intelligence they got,” Bush said. In a subsequent and quickly offered back-pedaling remark—on his way to saying he would have made “different decisions”—Bush emphasized that a main problem with the Bush-Cheney invasion was “mistakes as it related to faulty intelligence in the lead-up to the war.” And as his Republican rivals jumped on Bush, they, too, blamed bad intelligence for causing the war. Sen. Marco Rubio (R-Fla.), insisting that he would not have favored the war (if he knew there were no weapons of mass destruction), commented, “President Bush has said that he regrets that the intelligence was faulty.” And former CEO Carly Fiorina noted, “The intelligence was clearly wrong. And so had we known that the intelligence was wrong, no, I would not have gone in.”

Throughout the run-up to the war, Bush, Cheney, and their lieutenants repeatedly stated assertions to justify the war that were not supported by the intel. They also hyped or mischaracterized existing intelligence to bolster their case for war. The book I wrote with Michael Isikoff, Hubris: The Inside Story of Spin, Scandal, and the Selling of the Iraq War, chronicles the elaborate Bush-Cheney campaign to misuse and misrepresent the intelligence. Certainly, there was some information within the intelligence community (which turned out to be wrong) indicating that Saddam Hussein was trying to revive programs to develop biological, chemical, and nuclear weapons. As the Bush White House was selling the possibility of war, the intelligence agencies did quickly produce a National Intelligence Estimate in October 2002 that said Iraq had “continued its weapons of mass destruction program.” But there was other intelligence and analysis—some of it mentioned in that intelligence estimate—casting plenty of doubt on this. In fact, on many of the key elements of the Bush administration’s case for war, the intelligence was, at best, iffy. Yet in this post-9/11 period, Bush and Cheney frequently declared there was no uncertainty: Saddam was pursuing WMD to threaten the United States, and, worse, he was in league with Al Qaeda.

Here are a few examples of how Bush and Cheney cooked the books:

Bush and Cheney did not invade Iraq because they had been hoodwinked by bad intelligence. They claimed the intelligence was solid—when it wasn’t. And they made stuff up. Days before the March 2003 invasion of Iraq, Bush told the American public, “Intelligence gathered by this and other governments leaves no doubt that the Iraq regime continues to possess and conceal some of the most lethal weapons ever devised.” Yet plenty of doubt existed. Intelligence analysts had registered uncertainty regarding all of the significant aspects of Bush’s case for war. Moreover, Bush and Cheney had for months tossed out a series of claims that were not supported by any confirmed intelligence.

The Iraq war at its heart was not an intelligence failure. Bush, Cheney, and their comrades were hell-bent on invading Iraq—not because of inaccurate intelligence, but because of their own assumptions and desires. The war did not happen because of bad intel. Consequently, asking whether the invasion should have happened knowing what is now known is an irrelevant exercise. For the Bush-Cheney gang, it truly did not  matter what the intelligence said. They were not victims. They were the perps.