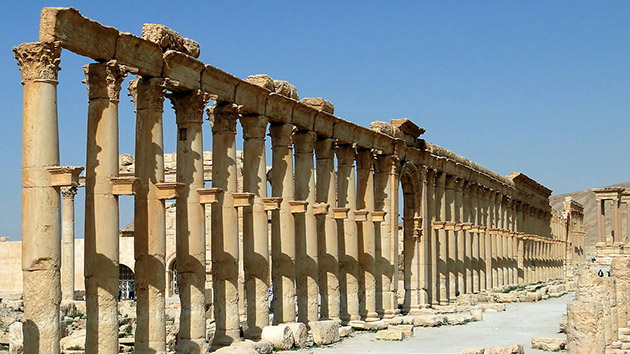 On Wednesday, militants from the so-called Islamic State captured the ancient Syrian city of Palmyra. After nearly a week of fighting, government forces reportedly fled the city, according to the British monitoring group Syrian Observatory for Human Rights. Palmyra, a desert outpost of 50,000 people, sits on a strategic highway and is close to several gas fields that ISIS has repeatedly attacked. It’s also a magnificent UNESCO World Heritage site known for its 2,000-year-old, Roman-era tombs, temple, colonnades, and artifacts, as well as a storied mythology.

As ISIS has taken more territory, it has damaged or destroyed many cultural heritage sites and priceless artifacts. Condemning much ancient art as idolatry, its fighters have chiseled the face off of a 3,000-year-old Assyrian winged bull and broken apart statues of the kings of Hatra. And, as I’ve reported, what ISIS doesn’t destroy, it loots and sells on the international black market to fund its activities.

When ISIS reached the gates of Palmyra late last week, fears arose that the World Heritage site would face the same kind of destruction seen elsewhere. Amr Al-Azm, an archeologist who works with a secret network of activists trying to safeguard Syria’s cultural heritage, told me, “If they get their hands on a World Heritage site, the looting itself could be bad, plus they have a ready made site for cultural heritage atrocities that they’re very likely to commit. Palmyra is full of Roman tombs and carvings. They’ll smash up what they want and steal what they want. It’s an iconoclast’s heaven.”

As of this evening, ISIS militants had seized the city, and the ruins were left “unguarded.” Syria’s antiquities director Maamoun Abdulkarim has claimed that hundreds of statues have been moved to safety. But nothing can be done for the remaining structures at the ancient site. Before ISIS took the town, AbdulKarim told the Guardian, “If ISIS enters Palmyra, it will spell its destruction. If the ancient city falls, it will be an international catastrophe.”