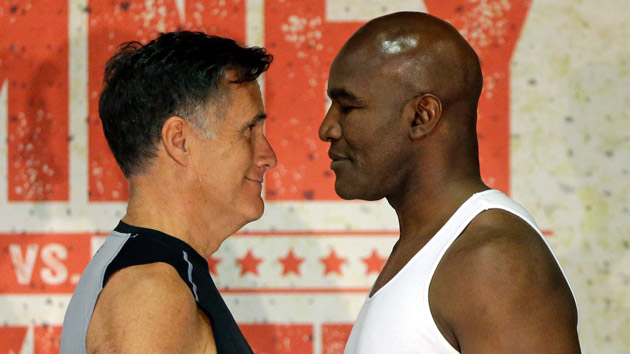 Muhammad Ali’s winning formula for boxing was to “float like a butterfly and sting like a bee.” There was plenty of floating, but not much stinging, for former presidential candidate Mitt Romney on Friday night, during a two-round charity bout in Salt Lake City, against former five-time heavyweight champion Evander Holyfield.

Revealing some prime #grandpabod in bright red satin shorts (remember, he only ate organic on the campaign trail?), and sporting an “I can’t believe I’m doing this but WTF” grin, the former governor’s sparring skills just couldn’t cut it.

The Associated Press captured what’s been dubbed the “Quake on the Lake“:

Romney, 68, and Holyfield, 52, sparred, if you could call it that, for just two short rounds before Romney ran away from the boxer and threw in the towel, giving up a round early in the lighthearted fight that came amid several other fights by professional boxers and an auction.

The two barely threw any punches and largely just danced around, occasionally lightly jabbing each other in the midsection in what was much more of a comedic event than an actual bout.

Let’s be honest: Holyfield, who once famously lost part of his ear in a fight with Mike Tyson, could have knocked out the former governor of Massachusetts with a single punch. But the joyous thing, the meaningful thing, was that he tried. Please proceed, governor:

Romney landed at least one solid jab, it seems: 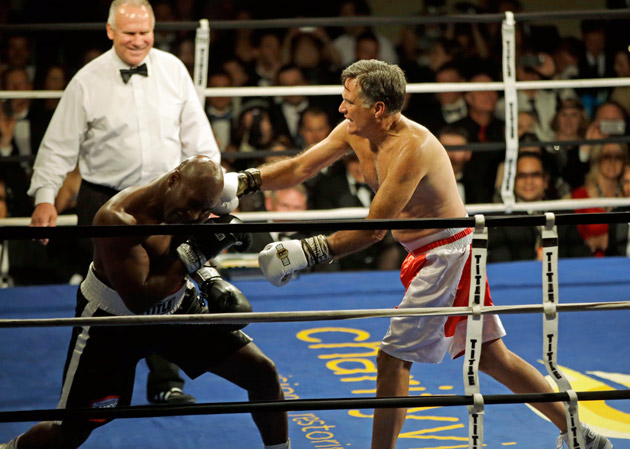 Holyfield then took a fall to make things interesting:

In the end, a ring-side Anne Romney—who always has her boyfriend’s back—threw in the towel on Mitt’s behalf, and Holyfield emerged victorious:

The black-tie affair raised at least $1 million for Charity Vision, a Utah-based nonprofit that helps doctors perform surgeries for the blind in developing countries. That amount of money is apparently equivalent to Holyfield’s net worth, and 1/25 of Romney’s, according to Buzzfeed’s Tale of the Tape.

After the match, Holyfield apparently quipped to Romney: “You know what? You float like a bee and sting like a butterfly.”

And so everyone had an enjoyable time, especially Ann Romney: