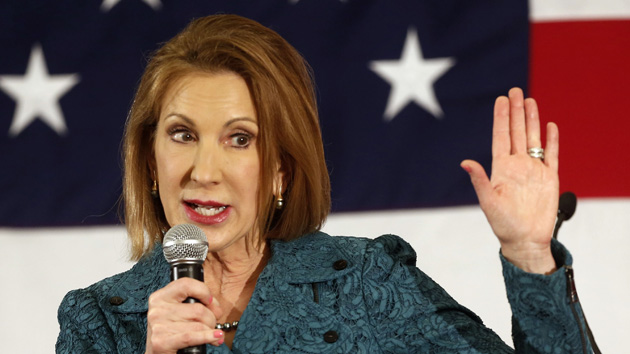 On Monday morning, Carly Fiorina, a former CEO of Hewlett-Packard and a failed 2010 Senate candidate, announced that she too is running for the GOP presidential nomination. “I think I’m the best person for the job because I understand how the economy actually works,” she said on Good Morning America. “I understand the world; who’s in it.” Not coincidentally, she has a new book coming out this week.

Fiorina’s sole claim to president-ish experience is her tenure at HP, and that stint was marked by layoffs, outsourcing, conflict, and controversy—so much so that several prominent former HP colleagues recoil at the idea of Fiorina managing any enterprise again, let alone the executive branch. Seven years ago, when Sen. John McCain (R-Ariz.), then campaigning for the presidency, recruited Fiorina as an ambassador to women voters—and she was mentioned as a possible veep pick for McCain—I noted that her record at HP essentially disqualified her as an economic expert or a potential candidate. In the years since, she has not done anything that would prompt a reassessment. Her biggest accomplishment in recent years appears to have been running a losing campaign against Democratic Sen. Barbara Boxer of California—an effort perhaps best known for its production of the bizarre “Demon Sheep” ad. Though she has defended her time at HP, it remains heavy baggage.

Here’s how I described it when she partnered up with McCain:

Her stint as a corporate titan was more mixed than master-of-the-universe. In 1999, Fiorina took over Hewlett-Packard, the troubled computer company, becoming one of the top women in Corporate America. Previously, she had built a successful career mostly in marketing and sales at AT&T and Lucent, but she had the not-so-good fortune to be taking the helm of an engineering-driven tech company as the tech boom was ending. Her solution to HP’s ailments was controversial: buying Compaq. She pushed the $19 billion acquisition over the opposition of many HP stockholders, including, most notably, Walter Hewlett, the son of the company’s founder, who argued the merger would not make HP more competitive.

At HP, Fiorina developed the reputation of a manager who knocked heads together—or who chopped them off. And there were massive layoffs during her tenure. In 2003, the company announced it would dismiss almost 18,000 people. (That year, the firm posted a $903 million loss on $56.6 billion in revenue.) When the outsourcing of jobs turned into a national political issue, Fiorina became the poster-girl for an industry campaign aimed at blocking any legislation that would restrict a company’s ability to can American employees in favor of workers overseas. She and executives from seven other tech companies issued a report that argued that any such measures would hurt the U.S. economy. The best way to increase American competitiveness, they declared, was to improve schools and, yes, reduce taxes. At a Washington press conference, Fiorina said, “There is no job that is America’s God-given right anymore. We have to compete for jobs.” The remark did not go over well with critics of outsourcing, who have ever since used it as an indicator of corporate insensitivity.

Fiorina’s stint at HP was marked by other moments of controversy. In March 2004, after HP shareholders voted 1.21 billion to 925 million to expense stock options, she opposed the move, essentially opting to stick with accounting practices (that were used by other corporations) that did not reveal a company’s true value. That same year, Forbes reported that Hewlett-Packard was “among many other U.S. companies that kept offices in Dubai and were linked to Iranian traders there.” The article suggested that HP and other countries were skirting export controls to trade with Iran. And in early 2005, Fiorina announced that pop star Gwen Stefani would join the HP design team and work on the company’s line of digital cameras.

Fiorina wasn’t around long enough to see her Plan Stefani to completion. In February 2005, she was pushed out of HP. The company’s board, with which she had been battling for years, had had enough of her. The Compaq merger had not yielded the benefits—improved shareholder returns and greater profits—she had promised. At the time of her dismissal, Hewlett-Packard stock was trading at about the same price as when she first unveiled the Compaq deal. Eighty percent of the company’s operating profits were coming from its old-line printing business. She had not succeeded in reviving HP as a computer-selling powerhouse. The day she was dumped, the company’s stock price rose 7 percent. That was Wall Street exclaiming, Hooray. As Robert Cihra, an analyst with Fulcrum Global Partners told Money magazine, “The stock is up a bit on the fact that nobody liked Carly’s leadership all that much. The Street had lost all faith in her and the market’s hope is that anyone will be better.”

Management experts say Fiorina, through the Compaq acquisition, created a good executive team with a can-do attitude. That helped a rank-and-file, engineering-focused organization consider how to market products instead of simply making them. But the charismatic leader refused to delegate operations to top lieutenants managing HP’s far-flung divisions. What’s more, she had a tough time getting them to work together…

As a result, many of the execs who came to HP through Compaq have jumped ship since the merger. That left Fiorina with much the same slate of HP’ers who were in key positions before the blockbuster deal.

There is plenty to criticize about Fiorina’s tenure at HP. At this point, the changes that Fiorina made didn’t turn out so well for the thousands of Hewlett-Packard and Compaq employees that were laid off and the millions of HP stockholders who lost equity since she took over. HP stock is worth less today than it was in 1999. Dell and IBM stock has increased in value.

But Fiorina did fine for herself. She departed the company with a $21 million severance package. “I doubt very much that she’s worried about making ends meet,” Magid cracked.

In her 2006 book, Tough Choices, Fiorina defended her management of HP and claimed the firm’s subsequent successes were a result of changes she had implemented. But it had been a rocky tenure at best. Nevertheless, McCain is deploying Fiorina as a surrogate on economic policy and as an ambassador to women voters. But in this time of economic insecurity, there’s not much about Fiorina’s time at HP that can be reassuring to voters (female or otherwise) experiencing financial jitters. After six years at Hewlett-Packard, she ended up symbolizing not one but at least three corporate excesses: outsourcing, M&A-mania, and golden parachutes. Workers and shareholders did not prosper during her reign, but Fiorina made millions, got a book deal, and now is a top PowerPointer for a presidential candidate. She’s a real American success story—for corporate Republicans.