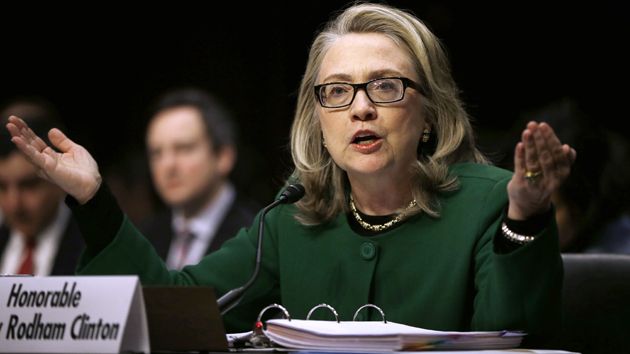 Could the main obstacle to Hillary Clinton testifying about Benghazi be Rep. Trey Gowdy (R-S.C.), the chair of the special House committee set up to investigate the 2012 terrorist attack that killed US Ambassador Chris Stevens and three other Americans?

Clinton and Gowdy have been in a tug-of-war for the past few weeks. At the end of March—following the news that Clinton, the leading Democratic 2016 candidate, had used a private email account when she was secretary of state and that her emails about Benghazi and all other official matters were not originally kept by the State Department—Gowdy asked Clinton to come before the committee for a private interview to discuss the emails she had exchanged concerning Benghazi and Libya. After such a session, Gowdy noted, the panel would schedule a time for her to testify publicly about the event itself.

Last month, Clinton’s lawyer, David Kendall, responded and said there was “no reason to delay her appearance or to have her testify [about the emails] in a private interview.” It was a clear sign that the Clinton camp would like to get her inevitable appearance before the GOP-created Benghazi committee over and done with. This move came just as Gowdy’s committee signaled that it may not release its findings until soon before the 2016 election. Reacting to that news, John Podesta, Clinton’s campaign chairman, huffed that the committee’s admission “is the most telling evidence yet that their investigation is solely about playing politics in the 2016 presidential campaign.”

Then, on April 23, Gowdy fired back with a letter to Kendall insisting that Clinton submit to either a private “transcribed interview” or a public hearing to discuss her emails and other documents (but not to talk about the actual Benghazi attack). Only if that interview or hearing assured Gowdy that “all documents needed to have a constructive conversation with the Secretary are in the Committee”s possession” would he then hold a hearing with Clinton to examine what happened in Benghazi. That is, no public hearing on the substance of the matter until Clinton testified (privately or publicly) about the emails and convinced Gowdy that the committee now possessed all the related emails and documents.

And that’s the rub. Can Clinton, whose official emails were first kept on a private server and then vetted by her own aides before being turned over to the State Department, say under oath that she knows beyond doubt that every single Benghazi email she sent or received now resides within the committee’s files? And will Gowdy ever accept an assurance from her that all her Benghazi emails made it to the State Department and were subsequently shared with the committee?

This political dance played out at the end of last week. In an interview with USA Today‘s Susan Page, Gowdy indicated that he might be willing to accept Clinton’s word if she said under oath that all her emails have been provided to his committee. “If she were, under some theory, able to say, ‘Yes, I can promise you under penalty of perjury you have every single document you’re entitled to,’ that would probably shut off that line of inquiry,” Gowdy said. “If she can, then it will be a short conversation.”

But Gowdy also left himself plenty of room to be unpersuaded by Clinton. He noted, “If she testified under oath [that all emails and relevant documents were turned over], I think my first question would be, ‘Madame Secretary, with all due respect, how do you know that? Because you’re not the one who went through the emails; your lawyer did.'”

It looks as if Gowdy might be setting a trap for Clinton. (At least one conservative pundit sees it this way.) If Clinton cannot say with 100 percent certainty that Gowdy’s committee has every digit of her data related to Benghazi, then she cannot testify on what happened—and the committee will drag out the proceedings further into the 2016 campaign season.

Clinton is trying to avoid being so cornered. On Monday, Kendall sent a letter to Gowdy, asserting there was no need for two rounds of testimony. “Respectfully,” he wrote, “there is no basis, logic, or precedent for such an unusual request.” Clinton, he added, was prepared to come before the committee and stay as long as necessary to answer all queries about the Benghazi attack and her emails. Kendall reminded Gowdy that Clinton has already testified about Benghazi before other House and Senate committees (which, by the way, have found no wrongdoing or conspiracies on her part). In a not-so-veiled jibe at Gowdy, Kendall noted that Clinton “believes that the Members of the Committee are able to decide how much they will focus on the tragic deaths of four Americans in Benghazi, including what can be done to keep those who serve our country safe—and how much they will focus on how she e-mailed.”

After all this parrying, the question is: Does Gowdy want to have Clinton testify about what transpired in Benghazi (and Washington) and proceed with the investigation—the House GOPers have already spent more time investigating Benghazi than Congress devoted to the Iran-Contra scandal—or does he want to play cat and mouse with Clinton far into the election cycle? By the standard Gowdy cited during his interview with Susan Page, Clinton will not be able to satisfy him about the emails. After all, given how she and her aides handled those records, there is no way for her to provide an iron-clad guarantee. But will Gowdy exploit that to drag out his inquiry and prevent Clinton from an appearance in which she presumably will defend her actions and swat aside the various Benghazi conspiracies (as she has previously done)?

At this stage, Clinton is eager to address the core issues and move on, and Gowdy is focusing on the emails and establishing potential grounds to stop her from testifying publicly about the attack itself. If no deal is sorted out, the committee could end up blocking Clinton from testifying about the main event. That could look odd to some. But any delay—as politically brazen as it might appear—could well inconvenience Clinton more than the committee.