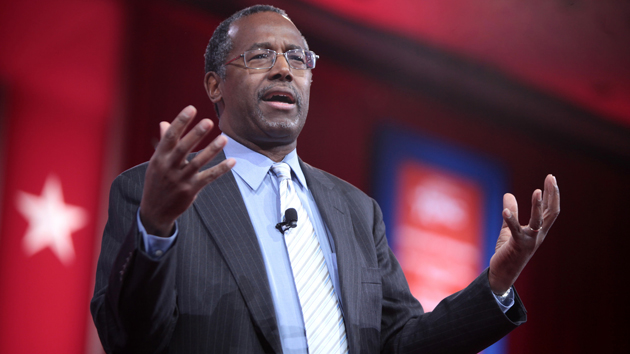 GOP grassroots star Dr. Ben Carson is not letting his presidential campaign interfere with another important endeavor: delivering speeches and getting paid handsomely for them. National Review reported last month that Carson, in an unusual move, will continue to deliver paid speeches “well into next fall.” The conservative magazine noted that Carson “would break with long-standing practice discouraging presidential candidates from collecting cash at the podium.” Carson reportedly charges at least $40,000 for each appearance.

Carson—whose rise from the housing projects of Detroit to international renown as a neurosurgeon became a TV movie—has been a sought-after public speaker for years. But the demand for Carson speeches within conservative circles soared after his 2013 National Prayer Breakfast speech, during which he sharply criticized President Barack Obama, who was sitting a few feet away. Carson’s speaking engagements—which range from political groups to churches to health care organizations—are booked by the Washington Speakers Bureau.

Typically, presidential hopefuls clear their speaking schedules and eliminate lucrative contracts to avoid any appearance of conflicts of interest. But not Carson. In January, as Carson was preparing to run for president, Armstrong Williams told National Review that WSB had booked hundreds of gigs for Carson in the upcoming months. He announced his bid for president in May.

In January, as Carson was preparing to run for president, Armstrong Williams told National Review that the Washington Speakers Bureau had booked hundreds of gigs for Carson in the upcoming months.

Pocketing large speaking fees from all sorts of groups and interests—and the potential conflicts of interest this can create—is not the only potential problem for Carson. Candidates who give paid speeches risk violating campaign finance laws, says Larry Noble, senior counsel at the Campaign Legal Center, a campaign finance legal advocacy group. When Carson now gives a paid speech, he cannot mention his candidacy or refer to his presidential campaign, because if he does so that would make the event a campaign speech from a legal perspective. And if he’s getting paid to give a campaign speech, Noble says, the speaking fee would be considered a campaign contribution and be subject to the contribution limits of $2,700—which is much lower than his usual speaking fee. Beyond that, if Carson delivers a campaign speech that is paid for by trade group, corporation, or nonprofit, it would be against campaign finance law, no matter the amount.

Carson is hardly the only current presidential contender to earn big bucks on the speaking circuit. Former Pennsylvania Sen. Rick Santorum made up to $50,000 per speech, but only after his 2012 primary defeat. Former Texas Gov. Rick Perry promptly signed with WSB after leaving office this January. (It’s unclear if he will continue speaking after he launches his presidential campaign on June 1st.) Former Arkansas Gov. Mike Huckabee, who is mounting his second White House bid, raised eyebrows in 2007 when he continued to speak for money while campaigning. And, of course, the fortune that Democratic presidential candidate Hillary Clinton has amassed from paid speeches before she announced her candidacy is well known. (Clinton gave her final paid speech as a noncandidate on March 19.)

Carson may be a long shot to win the GOP nomination, but his entry into the 2016 race has already paid off. Last week, the Washington Examiner reported that his sixth and most recent book, One Nation: What We Can All Do to Save America’s Future, has been “flying off the shelves” since the campaign launched on May 4. According to the Examiner, sales of Carson’s book quadrupled the week after his announcement. One Nation, which had already spent several weeks on the New York Times bestseller list after its June 2014 release, has now sold over 360,000 copies.