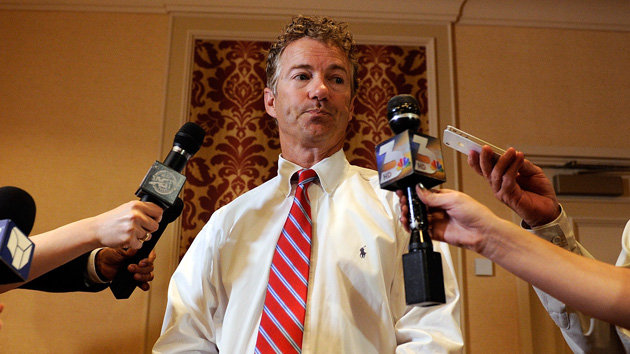 I haven’t been surprised by Sen. Rand Paul’s presidential campaign launch, with the GOP senator from Kentucky winning more attention for his testy interactions with reporters than for his libertarian theology. These past few days, Paul had a tough time when journalists posed him the most predictable of questions: Can you explain your position on abortions? Why did you flip from opposing all US foreign aid to Israel and other nations to supporting such assistance? Do white Republican voters support criminal justice reform? He talked over one interviewer—and then accused her of talking over him—and he walked out of another interview.

This all reminded me of the time I tried to engage Paul about an important matter: what his father Ron Paul knew about a newsletter published under his name that included racist, anti-Semitic, and homophobic commentary. It was 2012, and Ron Paul was campaigning for president in the GOP primary in New Hampshire. Rand Paul, already a senator, was helping his old man and spinning for him after the debates. But Rand Paul had no spin for my questions about this newsletter. Nor did he have any answers. When I asked about the publication, he turned his back to me and refused to answer. It was a curious response. I’ve had politicians walk away without replying to a query. But I’ve never seen one pivot away and pretend I was invisible. It seemed a bit immature: I can’t seeeee you.

To be fair, I have had more courteous interactions with Paul. A few months ago, I saw him at a Washington reception honoring Bob Schieffer of CBS News, and we had a long and pleasant conversation about criminal justice reform, health care, and other matters. But that earlier exchange has always stuck with me, and I’ve wondered what it said about Paul, who is now taking his testiness national and finding it does not play so well.

Here is my report on that 2012 encounter:

Sen. Rand Paul (R-Ky.) turned his back to me. Why? Because I asked a question he really didn’t want to answer.

On Saturday night, during the first of the back-to-back New Hampshire debates, ABC News moderator George Stephanopoulos asked Rep. Ron Paul, who’d been running second in the New Hampshire polls before the first GOP presidential primary, about racist remarks that appeared in his newsletters during the 1980s and 1990s: “Can you…explain to everybody what happened there, how it was possible that those kind of comments went out under your name without you knowing about it?”

Paul said he did not write those passages, but he declined to explain how such swill had ended up in a newsletter bearing his name. He dismissed the 20-plus-year-old matter as “diverting the attention from most of the important issues.” But then he jumped back in time himself, saying, “You ought to ask me what my relationship is for racial relationships. And one of my heroes is Martin Luther King [Jr.] because he practiced the libertarian principle of peaceful resistance and peaceful civil disobedience.”

After the debate, I found Rand Paul in the Spin Room, where representatives of the candidates had gathered to explain to the gaggle of reporters why their particular man had won the debate and was now firmly on the path to victory. I asked him if he could point to any specific times in his life—as a child or young adult—when his father had expressed admiration for King. He replied:

Through the years, I’ve not only heard him say that, but that he has admiration for Gandhi. He has admiration for people who have led mass and nonviolent protests against government unjustness. There’s one quote I can remember him using, saying that ‘any unjust law is a law a majority passes upon a minority but doesn’t make binding on themselves.’ And that was the whole nature of segregation in the South…That’s something that’s been consistent through his career.

That was not so specific, but Rand Paul did at least note that his pop could cite MLK. (The real quote: “An unjust law is a code that a majority inflicts on a minority that is not binding on itself.”)

Next, I asked, “Then can you explain why in the newsletter that came out under his name, they called Martin Luther King a communist and a philanderer?”

“But how did that come to be?” I inquired.

This was when Rand Paul turned his back to me—and said, “Anybody else?”

“You’re turning your back on me,” I remarked. “Can you just explain? Is he responsible for that?”

“You’re not going to answer that question?”

Another reporter jumped in: “Did you ever read the newsletters when you were growing up?”

His back was still toward me. I moved off to listen to pointless spin from others.

Though Sen. Paul had not displayed the best manners, I decided to give him another chance. After the second New Hampshire debate on Sunday morning, I saw him entering the Spin Room and trailed him to his designated spot. I first asked how he thought his father had done this morning. “He did great,” he said. Then I returned to the previous evening’s topic:

“Last night I asked you a question and you turned your back on me.”

“I’ll probably do the same.”

“Your father last night brought up the issue of Martin Luther King…He talked about history. Why won’t you talk about the newsletter and say how—”

“If you want to talk about current events.”

“Your father talks about history all the time. Why can’t you talk about this newsletter.”

“Why can’t you talk about who wrote this?”

“But you didn’t answer it. That’s the thing. Why can’t you answer this?”

Another reporter then interrupted: “What do you think of Romney?” Paul happily fielded that query: “I think he did very well in the debate…I think he presents himself very well. He shows great leadership.”

Ron and Rand Paul truly do not want to talk about those newsletters. Is it conceivable that Ron Paul doesn’t know who wrote the garbage that appeared under his imprimatur—and helped him make money? Not really. This is a cover-up. They are stonewalling. And it appears the Pauls will do almost anything to avoid explaining the origins of these and other racist, homophobic, anti-Semitic, and conspiratorial claims.