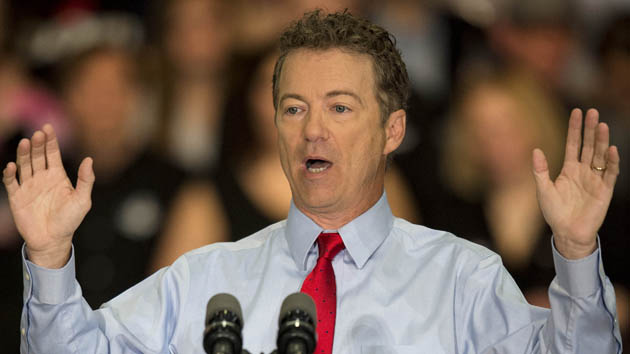 As one of a growing number of GOP 2016 wannabes, Sen. Rand Paul has tried to sell himself as the best Republican candidate to reach out to African-American voters. He’s talked about the need for criminal justice reform. During the protests in Ferguson, Missouri, he called for demilitarizing police forces. Yet his response to the riots in Baltimore show that he has a long way to go. During an interview with conservative radio host Laura Ingraham on Tuesday, the Kentucky senator blamed the turmoil not on the police brutality that resulted in the death of Freddie Gray, but on absentee fathers and a breakdown in families.

“It’s depressing, it’s sad, it’s scary. I came through the train on Baltimore last night, I’m glad the train didn’t stop,” Paul said, laughing at his own unfunny joke. He then pontificated of the unrest: “The thing is that really there’s so many things we can talk about, it’s something we talk about not in the immediate aftermath but over time: the breakdown of the family structure, the lack of fathers, the lack of sort of a moral code in our society. And this isn’t just a racial thing, it goes across racial boundaries, but we do have problems in our country.”

By the way, a week ago, Paul’s 22-year-old son William was cited for driving while intoxicated after he was in a car crash.

Listen to the audio of the interview, recorded by Media Matters (hat tip to TPM):

Paul wasn’t the only presidential aspirant to comment on the riots. Hillary Clinton sent out a tweet on Monday calling for peace but supporting the protestors who were upset by Gray’s death.

Tonight I am praying for peace & safety for all in Baltimore, & for Freddie Gray’s family – his death is a tragedy that demands answers. -H

Former Baltimore resident and likely presidential candidate Ben Carson pleaded with parents in the city to keep their children away from the disorder. “I urge parents, grandparents and guardians to please take control of your children and do not allow them to be exposed to the dangers of uncontrolled agitators on the streets,” Carson said in a statement.

Texas Sen. Ted Cruz lamented the school closures across the city. “No man, woman, or child should fear for his or her safety in America—not in their schools, not in their neighborhoods, not in their cities—but today families are scared,” the GOP contender said.

But long-shot Democratic candidate Martin O’Malley went further than just a simple statement. O’Malley, the former mayor of Baltimore, canceled a string of paid speeches in Europe to return home.