American companies have around $2.1 trillion in untaxed profits stashed overseas, according to a new report by the Center for Effective Government and the Institute for Policy Studies. About half of that amount is held by 26 large companies like Apple, General Electric, and Microsoft. If these companies paid federal taxes on their offshored profits from 2014—and got refunds for taxes they’ve already paid to other countries—they would owe an estimated $364 billion.

Here’s what could be done with that money: 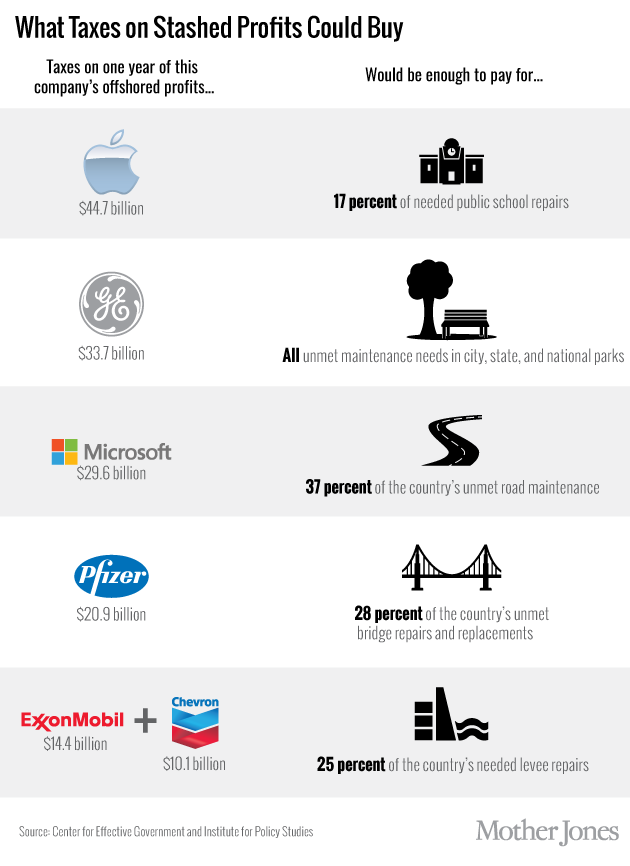 The report also estimates the amount of taxes that the largest stockpilers would owe if their 2014 profits stored abroad were taxed:

The reason American companies can avoid the IRS by keeping earnings has its roots in a 1986 tax bill that lets firms postpone paying taxes on profits stored abroad until they are “repatriated,” or brought back to the United States. Since then, stashing profits abroad has become one of a number of loopholes used by corporations to avoid taxes. (Another common one is tax inversion, or moving corporate headquarters abroad, if only on paper.) In 2004, Congress passed a one-time “tax holiday” as part of the American Jobs Creation Act, enabling companies to repatriate profits at a 5.25 percent tax rate instead of the usual 35 percent corporate tax rate.

Evidence shows that this economic experiment didn’t work so well. According to a Center on Budget and Policy Priorities report from 2011:

Firms mostly used the repatriated earnings not to invest in U.S. jobs or growth but for purposes that Congress sought to prohibit, such as repurchasing their own stock and paying bigger dividends to their shareholders. Moreover, many firms actually laid off large numbers of U.S. workers even as they reaped multi-billion-dollar benefits from the tax holiday and passed them on to shareholders.

Though the 2004 tax holiday was billed as a one-time event, Congress is considering another one as part of a the Invest in Transportation Act of 2015, cosponsored by Sen. Barbara boxer (D-Calif.) and Sen. Rand Paul (R-Ky.). Boxer has called it a “win-win for our economy and our country.” The Center for Effective Government and the Institute for Policy Studies see it otherwise: “The proposed ‘tax holidays’ would generate a relatively small, one-time revenue bump while allowing large corporations to avoid much larger amounts of tax owed over the longer term.”