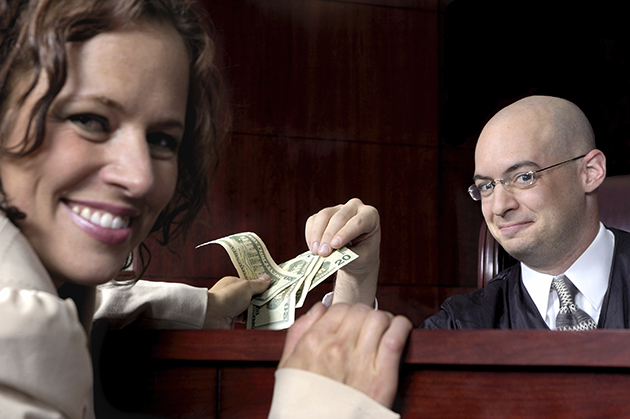 Though they usually don’t get much attention, judicial elections have become just as cutthroat and cash-driven as other political races. To win a judgeship, many candidates must slime their opponents and win the financial backing of often unaccountable interests that may have business before them in court. (Read more in this Mother Jones investigation.)

The amount of money flowing into these races is staggering: State judicial candidates raised $83 million in the 1990s. Yet during the two years 2012 election cycle, they raised more than $110 million—and that doesn’t include outside spending. Altogether, more than $250 million has been spent on judicial races since 2000.

Judges themselves often hate the process of fundraising and mudslinging, but view it as a necessary evil. Sue Bell Cobb, a career judge and the former chief justice of the Alabama Supreme Court, just wrote about her experience for Politico. Her story is worth a full read, but here’s a taste:

While I was proud of the work I did for the next 4 1/2 years, I never quite got over the feeling of being trapped inside a system whose very structure left me feeling disgusted. I assure you: I’ve never made a decision in a case in which I sided with a party because of a campaign donation. But those of us seeking judicial office sometimes find ourselves doing things that feel awfully unsavory.

When a judge asks a lawyer who appears in his or her court for a campaign check, it’s about as close as you can get to legalized extortion. Lawyers who appear in your court, whose cases are in your hands, are the ones most interested in giving. It’s human nature: Who would want to risk offending the judge presiding over your case by refusing to donate to her campaign? They almost never say no—even when they can’t afford it.