You know how parents are always going on and on about their kids? “My kid this and my kid that” and shut up already, ok? Some of us don’t even have kids and others of us have kids but those kids are really just sacks of potatoes dressed in clothes and we bring them around and introduce them to people like they’re our kids but then we get hungry and we rip off their little baseball caps and eat the potatoes and OH MY GOD I ATE MY KID!

So parents! On Facebook! Annoying! Sometimes you want to just write them a nasty letter that’s like, “no one cares about your dumb kid. Shut up.” But you never actually do that because you understand that the parent just loves their kid and parents are supposed to love their kids and they want to be proud of their adorable kid and sing its praises from the rooftops and you understand in your heart, in your bones, that that is ultimately a good thing and complaining about it would not be a good look.

Some people in Australia apparently did do that, though. According to news.com.au‘s Em Rusciano, a woman named Jade Ruthven received the following enraged letter from a group of “friends” who were miffed by her over-sharing: 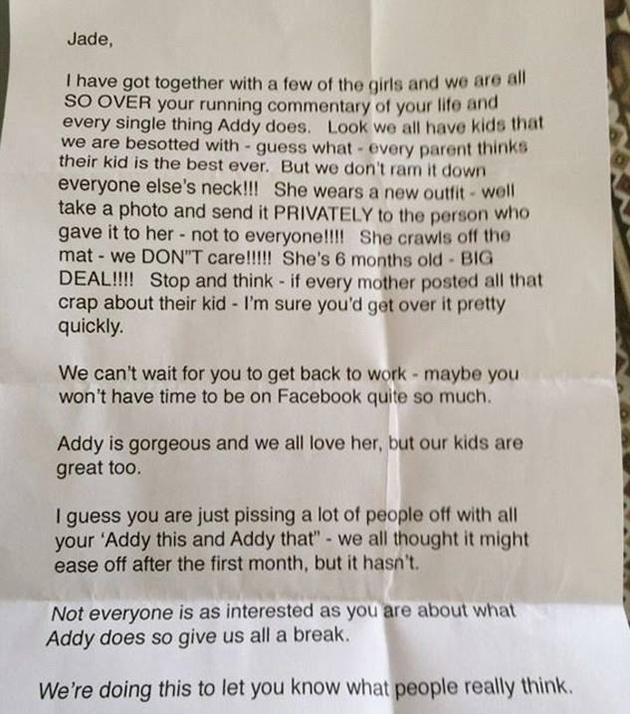 Jade’s friends are not necessarily bad people, but they are not Jade’s real friends. Real friends are willing to suffer your annoying child-bragging. Jade can do better.