On Tuesday night, the Houston Rockets played their intrastate rivals the Dallas Mavericks in the first round of the NBA playoffs. Late in the game, the official Houston Rockets Twitter account sent out the following: 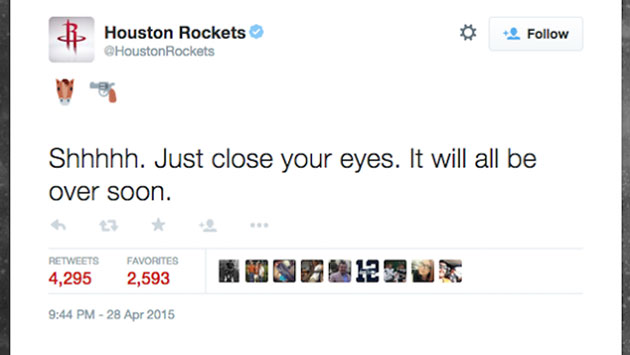 The internet being the stupid place that it is, a thousand crybabies immediately began to cry. Oh pray for the emoji horse! How dare the stupid Twitter account joke about horse slaughter! Wah wah wah!

The internet is a place where people cry about bullshit. If outrage is a currency—and it is—then the online market is drowning in counterfeits. People like to feign outrage because it allows them to demonstrate their humanity and show the world that they feel things strongly and people like to sleep with people who feel things strongly. Outrage allows people to define themselves in opposition to something, which is much easier than defining yourself on your own.

The Rockets went on to win the game (and thus the series) but not before the tweet was deleted. Today we learned that simply taking the tweet down and apologizing wasn’t enough. The Rockets fired the dude who tweeted it, their social media manager Chad Shanks!

Sometimes you can go too far. I will no longer run @HoustonRockets but am grateful to the organization that let me develop an online voice.

I did my best to make the account the best in the NBA by pushing the envelope, but pushed too far for some and for that I apologize.

I hope there’s another organization out there in need of someone willing to take chances and create engaging social content. I hope.

This is such bullshit. Emoji violence lost this dude his job. EMOJI VIOLENCE. Like, who was really outraged by this? Were you? Of course you weren’t. You are smart and normal and very attractive and people like you. But let’s pretend you were outraged by it. Here is my question: What outraged you about it? Did you not know that horses get shot when they are lame? Of course you knew it. Everyone knows that! Here’s what I know about horses:

The Houston Rockets are cowards.

The Los Angeles Lakers are the best team in sports.