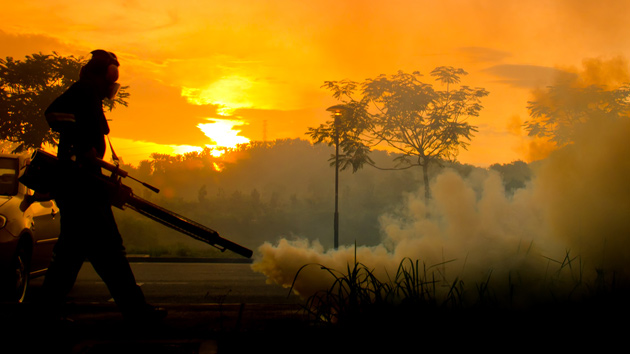 California’s drought isn’t bad news for everyone: turns out West Nile Virus has been thriving in the state’s parched climate. The California Department of Public Health announced last week that in 2014 it recorded the most cases of the potentially deadly mosquito-borne illness since it first showed up in the Golden State more than a decade ago. The CDPH tallied 801 diagnoses, including 31 deaths—the most ever in California.

Mosquitos get the virus after feeding on infected birds and spread it to humans through their bite. Symptoms normally include a high fever, headache, and stiff neck, but it sometimes develops into a dangerous neurological disease, like meningitis. Luckily less than 1 percent of people who get West Nile Virus develop those severe symptoms, and the vast majority experience no symptoms at all.

West Nile was first detected in California in 2003, and in the following two years, there were hundreds of cases. By 2005, health officials controlled its spread with spraying and other measures. This is the first influx since then, and it could be even worse. The rate of infection among birds in California was the highest ever in 2014—60 percent of tested dead birds had it, up from just over 30 percent five years earlier.

Furthermore, according to CDPH director Dr. Karen Smith, as the drought wears on, both birds and mosquitos have expanded their search for water closer to population centers, causing them to come into contact with each other more often and nearer to people. On top of that, more stagnated water sources mean more attractive places for mosquitos to lay eggs. The takeaway? Thanks to the drought, the number of infected mosquitos is increasing and coming closer to humans.

With water sources continuing to shrink and warmer temperatures increasing the length of mosquito season, Californians shouldn’t expect this West Nile activity to go away any time soon, especially down south. Most of the cases have shown up in the dry Central Valley and in Southern California (more than half were in Los Angeles and Orange Counties).

If you live in a county with a high incidence of the virus, the CDPH recommends draining any standing water on your property and taking precautions—bug repellant, long sleeves, pants—when going outside, especially at dawn and dusk.