This weekend marks the 50th anniversary of the “Bloody Sunday” assault in Alabama, where on March 7, 1965, police violently assaulted hundreds of demonstrators attempting to march from Selma to Montgomery to protest the fatal police shooting of 26-year-old Jimmie Lee Jackson.

Hurling clubs and tear-gas cannisters, state and local police viciously attacked more than 500 people that day. Images and footage capturing the violence shocked the nation and left an indelible mark on the civil rights movement. The march forced a new level of public awareness of the struggles shouldered by civil rights activists and African Americans, and is credited for helping pave the way for the passage of the Voting Rights Act of 1965. 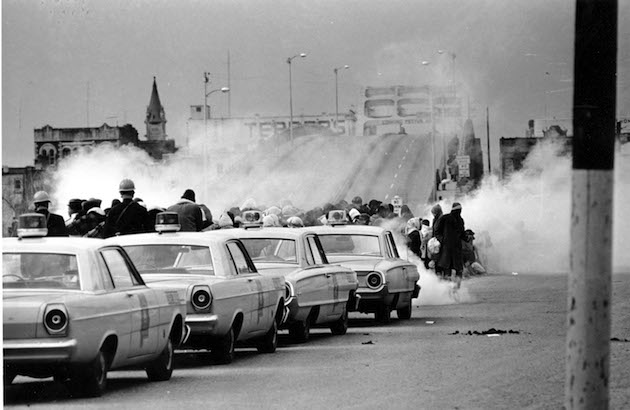 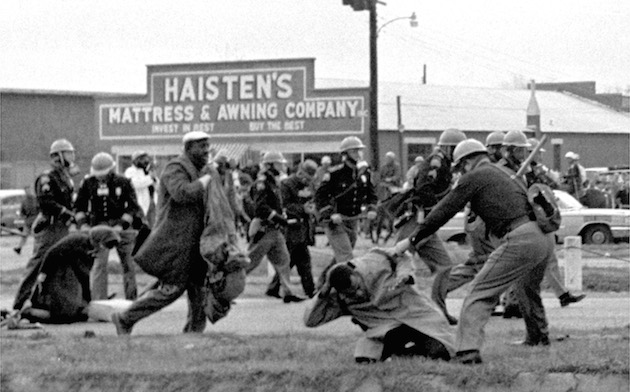 James “Spider” Martin, who died in 2003, was a young photographer at the Birmingham News assigned to cover the march. NPR recently broadcast an interview he did in 1987 about the day’s brutal events.

“He walks over to me and, blow! Hits me right here in the back of the head,” Martin said upon recalling a moment when a police officer approached him. “I still got a dent in my head and I still have nerve damage there. I go down on my knees and I’m like seeing stars and there’s tear gas everywhere. And then he grabs me by the shirt and he looks straight in my eyes and he just dropped me and said, ‘Scuse me. Thought you was a nigger.'”

President Obama and many other dignitaries are scheduled to visit Selma this weekend to commemorate the anniversary. On Friday, Obama called the work of civil rights activists an “unfinished project.” The president’s comment came in the wake of numerous high profile deaths of black men at the hands of police, and just days after a federal investigation cleared former Ferguson officer Darren Wilson, who fatally shot unarmed 18-year-old Michael Brown last August, of possible civil rights violations. At the same time, the Justice Department released a federal report detailing years of rampant racial discrimination, including disproportionate arrests of African Americans, carried out by the Ferguson Police Department.

Brown’s death and the failure of a grand jury to indict Wilson sparked a firestorm of debate over policing policies, with violent protests demanding police reform and that Wilson be prosecuted breaking out across the country. Many say the aggressive display of force by police officials towards non-violent demonstrators in Ferguson mirrored the events in Selma nearly fifty years prior. 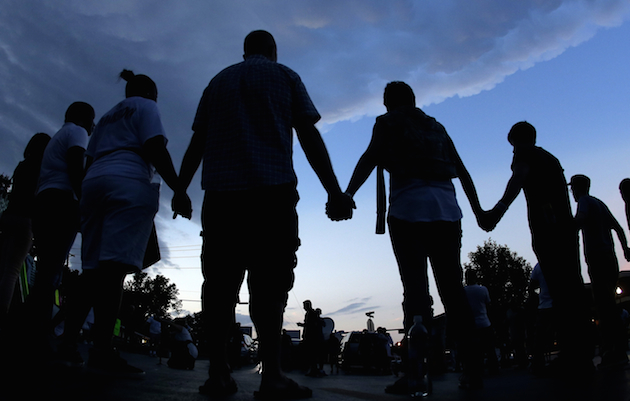 Also at the forefront of this weekend’s “Bloody Sunday” anniversary is the Supreme Court’s recent gutting of the pivotal Voting Rights Act, which required states with a history of discrimination to seek federal authority before attempting to alter local voting laws. In 2013, the court voted 5-4 to strike down a crucial tenet of the landmark legislation. The decision ultimately allowed states, including North Carolina and Texas, to enact strict voter ID laws without automatic Justice Department review. Many say such laws make it increasingly difficult for minorities to cast ballots.

“It is perversely ironic to commemorate the past without demonstrating the courage of that past in the present,” NAACP president Cornell Brooks told The Atlantic‘s Russell Berman last week. “In other words we can’t really give gold medals to those who marched from Selma to Montgomery without giving a committee vote to the legislation that protects the right to vote today.”