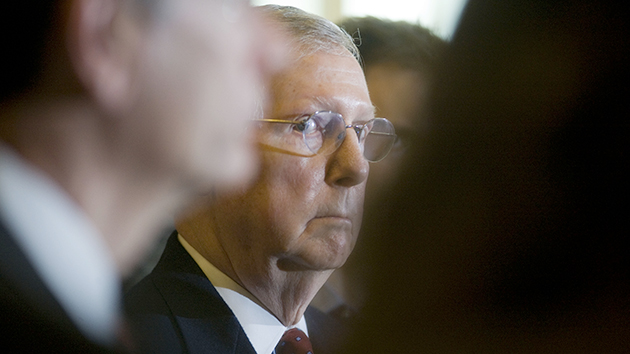 Earlier this month, Senate Majority Leader Mitch McConnell (R-Ky.) proposed a bold solution for any state that doesn’t like President Barack Obama’s flagship plan to slash carbon emissions: Just ignore it. The new rule, issued under the Clean Air Act, aims to reduce the nation’s carbon footprint 30 percent by 2030. It would require every state to devise a plan to cut the carbon intensity (pollution per unit of energy) of its power sector. By simply ignoring the mandate, McConnell reasoned, states could delay taking steps like shuttering or retrofitting coal-fired power plants until the rules get killed by the Supreme Court (even though the chances of that happening are pretty remote).

Last week, McConnell justified his unusual suggestion that state regulators deliberately ignore federal law by arguing that the rules themselves are illegal. And yesterday, he took his campaign to a new level by introducing—on behalf of GOP co-sponsors Rob Portman (Ohio), Roy Blunt (Mo.), Tom Cotton (Ark.), and Orrin Hatch (Utah)—an amendment to the Senate’s massive budget bill. It would allow any state to opt out of the rule if that state’s governor or legislature decides that complying would raise electric bills, would impact electricity reliability, or would result in any one of a litany of other hypothetical problems. The amendment could get a vote later this week.

Meanwhile, over in the House, Reps. Ed Whitfield (R-Ky.) and Fred Upton (R-Mich.) have introduced a bill along essentially the same lines, which is set to to be debated by the Energy and Power Subcommittee, which Whitfield chairs, next month.

Republicans are pitching these proposals as necessary steps to protect Americans from the power-hungry, climate-crazed Obama administration. But if passed, they might do more to protect the interests of coal companies. In fact, the Portman amendment introduced by McConnell explicitly allows states to opt out if the rules would “impair investments in existing electric generating capacity”—in other words, if they require the early retirement of any power plants. The apparent justification is that in order to comply with the Environmental Protection Agency, states will have to quickly implement sweeping changes to their power system that could leave residents with expensive, unreliable power.

In reality, many energy economists (not to mention utility companies themselves) have found that the range of options states have to comply with the EPA—such as mandating better energy efficiency and building more renewable energy—are more than enough to keep the lights on and bills stable, while simultaneously burning less coal. (Meanwhile, regardless of any new EPA rules, coal is already on a precipitous and probably irreversible decline thanks largely to the recent glut of cheap natural gas.)

Both bills also work on the assumption that the rules grossly overstep the EPA’s authority by extending beyond coal-fired smokestacks to the whole power system. That question is likely to be at the heart of the inevitable court battles over the rule. But as leading environmental lawyer Richard Revesz testified to a House committee this month, wide-reaching plans like this have been successfully implemented under the Clean Air Act for other pollutants like sulfur and mercury throughout the legislation’s 40-year history.

In any case, giving states the option to opt out of federal air quality rules essentially undermines the entire premise of the Clean Air Act, probably the most powerful piece of environmental legislation ever passed. As Natural Resources Defense Council policy chief David Doniger put it yesterday: “These bills would force us back to the dark days half a century ago when powerful polluters had a free hand to poison our air, because states were unwilling or unable to protect their citizens.”