Wisconsin Gov. Scott Walker will visit the US-Mexico border on Friday with Texas Gov. Greg Abbott. Walker, who is considering a run for president, is aiming to bolster his credentials as a critic of President Obama’s immigration policies. A photo wouldn’t hurt either.

The Mexican border is now an almost mandatory pit stop for Republican politicians (especially presidential aspirants) looking for the aura of on-the-ground experience on immigration. Sure, talking to a rancher, staring across a river, and visiting a detention facility in McAllen for 30 minutes might not offer much of a big-picture perspective. But that hasn’t stopped lawmakers from surveying the region in gunboats, ATVs, helicopters, and jeeps—invariably with camera crews in tow. Here’s a roundup:

Former Gov. Rick Perry: As governor of Texas for 14 years, Perry had plenty of opportunities to work on his border game face, and it shows: 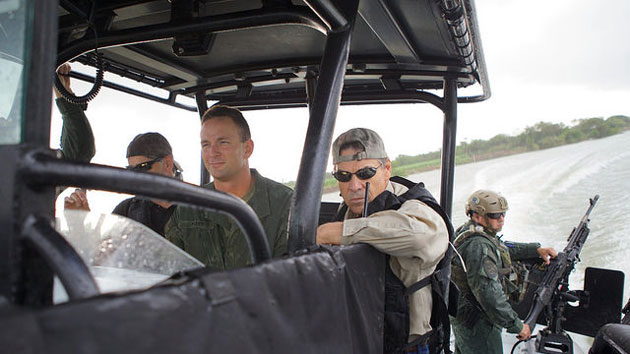 I’m on a boat. Rick Perry/Flickr 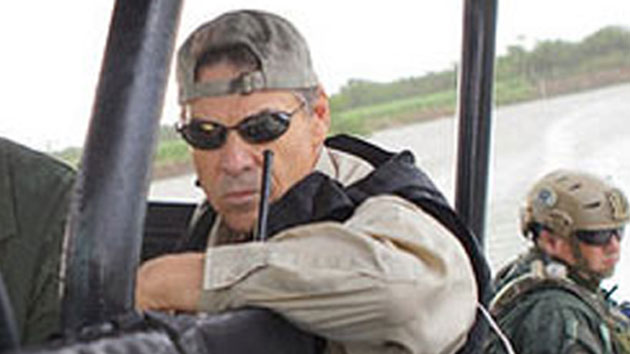 Here’s Perry on that same trip with Fox News host Sean Hannity on the set of Rambo on the Rio Grande last summer:

Sen. Marco Rubio: The Florida senator may take a hit from some conservatives for his support for a path to citizenship for some undocumented residents, but he demonstrated his ability to look stern while gazing into the great unknown on this visit to El Paso in 2011: 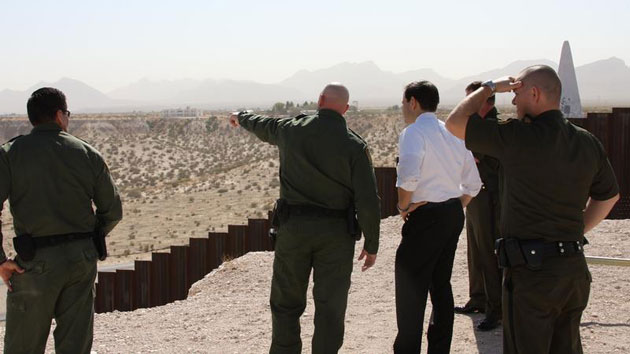 Gov. Bobby Jindal: Last November, Louisiana’s chief executive toured the Mexican border by boat and helicopter in the hopes of better understanding the child migrant crisis, which by that point had already subsided. Jindal’s entourage didn’t come away empty-handed: “In at least three locations, we saw where people were trying to make their way into Texas in an unimpeded manner,” boasted one member of Jindal’s group. 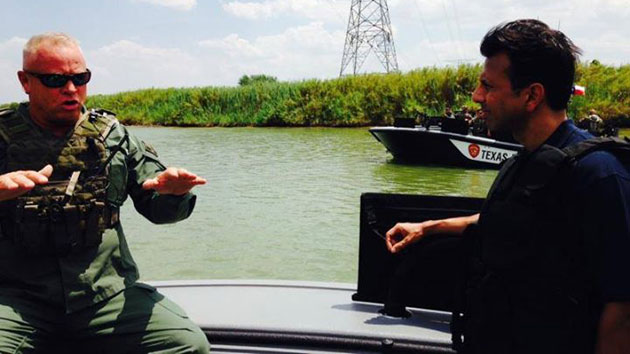 Sen. Ted Cruz: Texas’ junior senator has made more visits to Iowa than he has to South Texas, his state’s poorest region (much to locals’ chagrin). But last year, as media interest in the child migrant crisis peaked, he took the time to visit the border and tour a migrant processing facility in McAllen with former Fox News personality Glenn Beck:

Toured the border and spent time with Glenn Beck, @sentedcruz and @replouiegohmert over the weekend. Learned and saw a lot. We must secure our border. #AmericaFirst

For now, the rest of the field is playing catch-up. Former Arkansas Gov. Mike Huckabee visited the border in Texas during his 2008 campaign (joined at the Rio Grande by action star Chuck Norris) but has not been back since. Kentucky Sen. Rand Paul has not visited the border, although he did propose building a fence along New Hampshire’s southern border to keep out people from Massachusetts. Acclaimed pediatric neurosurgeon Ben Carson recently visited the Israeli border, where he mistook construction equipment for machine gun fire.

New Jersey Gov. Chris Christie may be the only potential candidate who has avoided the border on principle. Although he visited Mexico City on a trade mission in 2014, he balked at extending his trip to the Rio Grande—which is very far from both Mexico City and New Jersey. “This is silliness,” he told NJ.com. “If I went down there and looked at it, what steps am I supposed to take exactly? Send the New Jersey National Guard there?”

It’s not just potential Republican candidates getting in on the action. In recent years, the Rio Grande has been a frequent destination for DC’s finest. In 2013, Sen. Chuck Schumer (D-N.Y.)—who is not running for president—watched law enforcement apprehend a woman who had scaled the 18-foot border fence in Nogales. That same year, while aboard a speed boat with two Republican colleagues, Rep. Leonard Lance (R-N.J.) found a body floating in the Rio Grande. (“It was a vivid reminder that we have to secure our border and do it as quickly as possible,” he told Roll Call.) Last year, Rep. Steve Stockman (R-Texas) traveled to McAllen accompanied by writer (and birther) Jerome Corsi and a film crew from conspiracy website WorldNetDaily. The crew showed up unannounced at a DHS detention center at midnight and was not allowed in.

Still, Walker is smart to get his border-fence photo-op out of the way early—it may not be there much longer. If elected president, real-estate mogul Donald Trump (who has not visited the border) has pledged to personally supervise the construction of a new barrier along the southern border that will permanently end illegal immigration. “A wall,” he told Iowa voters last week. “A real wall…not a wall that people walk over.”

President Trump’s 2020 challengers may have to visit the Canadian border instead.