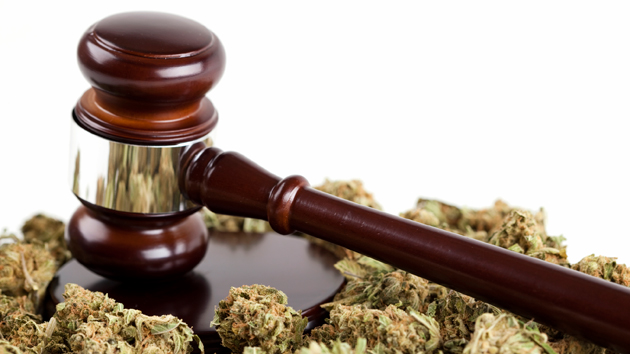 On Wednesday, a tense back-and-forth between congressional Republicans and the District of Columbia government over marijuana laws escalated into a dramatic showdown. In November, DC voters passed Initiative 71, which legalized marijuana—though with some major caveats—by an overwhelming margin. Mayor Muriel Bowser declared this week that the law would take effect at 12:01 a.m. Thursday. But Rep. Jason Chaffetz (R-Utah), who chairs the House committee that oversees District governance, has taken a hard line, suggesting that Bowser and other city officials could be arrested for moving forward with the law because it goes against the will of Congress. Here’s the breakdown of what’s happening in our nation’s capital.

What Initiative 71 does: The bill, which was approved by two-thirds of DC voters, is relatively modest in its aims, compared to the more robust legalization laws of states like Colorado.* It makes the possession of two or fewer ounces of marijuana legal for people 21 and over, and it permits consumption on private property, as well as the cultivation of a limited number of marijuana plants. Marijuana sales remain strictly prohibited—although people can transfer as much as an ounce to each other as long as no money or goods changes hands—and smoking in public is forbidden, too.

How Congress fought it: Congress’ central role in overseeing DC law presented obstacles for the implementation of Initiative 71 from the beginning. Chaffetz, a conservative Republican who won a tight contest to become chairman of the House oversight committee, is a longtime foe of legalizing and decriminalizing marijuana. Once the new Congress convened, it had 30 days in which to approve or disapprove the law. Instead, Republicans chose to undermine it through the federal budget: They attached a rider, or amendment, on this year’s $1.1 trillion budget that shuts down the pot law. The rider bars DC from using any funds to “enact any law, rule, or regulation to legalize or otherwise reduce penalties associated with the possession, use, or distribution of any schedule I substance.”

How DC fought back: The city government has argued that since voters passed the law before Congress attached the rider, the prohibition is not valid, and the law should stand. Pro-pot Washingtonians have insisted the only legitimate way Congress can block legalization is through a Resolution of Disapproval, in which the entire body votes against the law after the review period. No such action was taken.

Chaffetz’s threat: Bowser has communicated her intent to implement the law, repeatedly citing what she calls DC’s solid legal standing as well as her obligation to carry out the will of the voters. On Tuesday, Chaffetz and Rep. Mark Meadows (R-N.C.) sent a letter to Bowser in which they urged her to reconsider. “If you decide to move forward tomorrow with the legalization of marijuana in the District, you will be doing so in knowing and willful violation of the law,” they wrote. Chaffetz was more blunt in an interview with the Washington Post: “You can go to prison for this,” he said. “We’re not playing a little game here.”

What next: At a press conference Wednesday afternoon, Bowser, surrounded by city officials, accused Chaffetz of “bullying the District of Columbia.” She reaffirmed her intention to enforce the law beginning at midnight. “We are on very strong legal ground,” she said. “Congress shouldn’t be so concerned about overturning what 7 out of 10 DC residents are in favor of.”

Will Bowser be getting booked as DC residents prepare to get baked, legally? The Washington Post reports that House Republicans could back down and hand off the issue to the Department of Justice, which is far less likely to act as aggressively as Congress. (President Barack Obama came out in favor of Initiative 71 last December.) The legal battle will likely be protracted, but DC pot advocates are already planning to celebrate: The city will welcome Cannabis Academy, a “cannabis education and entrepreneurship” convention, this weekend.

Correction: An earlier version of this article misstated the margin by which Initiative 71 passed.