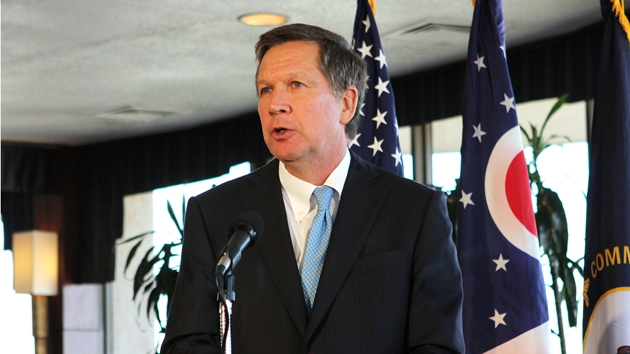 Ohio Gov. John Kasich is acting like a possible presidential candidate: He’s visiting early primary states, huddling with old advisers, and remaining frustratingly coy with the press. Unlike other likely Republican candidates who are plugging broad platforms, however, Kasich is earning attention by honing in, laserlike, on a single policy proposal that he has championed for years: a balanced-budget amendment to the US Constitution. The controversial issue—and its potentially extreme consequences—are leading political observers in Ohio and beyond to wonder if Kasich is using this high-profile quest as a launching pad for his possible presidential ambitions.

Last week, Kasich wrapped up a multiweek, six-state tour in which he urged state lawmakers and politicians to support the amendment, which would require the federal government to submit a break-even budget or risk violating the Constitution. The governor and his advocacy group, Balanced Budget Forever, are aiming to convene a constitutional convention to consider the amendment. Thirty-four state legislatures must pass supporting resolutions for a convention to move forward. Twenty-five have already done so, and Kasich has spent the last two months traveling from Arizona to the Dakotas to South Carolina in an attempt encourage the remaining state legislatures to join in.

The idea of a balanced-budget amendment first picked up steam during the stagflation of the 1970s, pushed by Republicans as well as Democrats eager to stave off accusations of irresponsible spending. By the time Ronald Reagan took office, 32 of 34 states had passed balanced-budget-amendment resolutions—and Reagan himself was a supporter—but the effort had lost momentum by his second term.

Michael Leachman, policy analyst at the Center for Budget and Policy Priorities, traces the reemergence of the balanced budget movement to 2010, when tea party fiscal hawks swept state legislatures. The right-wing American Legislative Exchange Council has been a driving force behind state-drafted resolutions. Leachman says there’s broad concern over the content of a balanced-budget amendment, as well as what could happen in the event of a constitutional convention. Supreme Court Justice Antonin Scalia said in 2014, “I certainly would not want a constitutional convention. Whoa! Who knows what would come out of it?”

Each amendment to the Constitution originated in Congress and was sent to the states for ratification. The convention that Kasich envisions is an alternative route to amending the Constitution and is without precedent in US history. That’s for good reason, says Leachman: a convention would not necessarily have to stop with a balanced-budget amendment. Once convened, it has the authority to consider and pass any amendment, and the president has no power to veto the result. “Look at the language of the states’ resolutions—they typically mention a balanced-budget amendment and other ‘related and appropriate fiscal restraints’ on the federal government,” Leachman says. “The language opens the door to other types of resolutions.”

Given the conservative push for the balanced-budget amendment, a constitutional convention could theoretically address a broad array of policies. The Convention of States group outlines this strategy: Call a convention, and tackle not only a balanced-budget amendment, but term limits for the Supreme Court, a hard cap on taxes—even redefining the Commerce Clause and General Welfare Clause of the Constitution. If such a convention were ever to happen, Leachman says, it would become a magnet for big-money interests, “and throw the country into serious turmoil.” Kasich’s group has claimed that this would never happen, calling a so-called “runaway convention” a “virtually impossible” scenario.

The amendment could also pose problems on a state level. Wendy Patton, an analyst at Ohio-based think tank Policy Matters for Ohio, says it’s counterproductive for Kasich to spearhead the movement, given his state’s history. “The role that the federal government budget plays as a stabilizer as the private economy rises and falls would be eliminated in a balanced-budget amendment,” Patton says. “It’s at cross-purposes with what states face in a recession, which is why we feel it doesn’t make sense for any state government.”

Indeed, since Kasich took office in 2011, Ohio has benefited enormously from federal funding. According to Patton, it’s pulled down hundreds of millions of dollars in federal cash for education and other programs, a factor she says has helped Ohio emerge from the recession with a relatively strong economy and an unemployment rate under 5 percent. “This is what would be on the chopping block with a balanced-budget amendment,” she says.

While the balanced-budget amendment’s historical failures are hard to ignore, Leachman says the movement has enough big names, including Kasich, Mike Huckabee, and Bobby Jindal, for it to gain some traction. Plus it has a receptive audience: Republicans haven’t held this many state legislative seats in nearly a century. According to the Roper Center for Public Opinion Research, nearly three-quarters of Americans support some form of a balanced-budget amendment, and if polling remains strong, Kasich could reap the benefits.

Why would the pro-Obamacare, relatively moderate Republican governor of Ohio push this idea in the first place? Is Kasich leveraging presidential speculation to advance his pet cause, as some have suggested, or the other way around? A former senior Ohio Democratic Party official says the governor’s effort is “a clear outward sign” that he’s considering a presidential bid. If this were simply a policy campaign, the official notes, Kasich wouldn’t be bringing the same top political strategists who guided his brief presidential bid in 2000 with him as he travels the country. Consistent press speculation has followed him, but Kasich has only said that “I have all my options on the table.”

Kasich is also a longtime budget hawk, and touts the balancing of Ohio’s books as a key accomplishment. “The balanced-budget message fits into his background, his biography, and where he would go in a presidential run…it plays into everything he’s ever done,” the state Democratic official said. The governor’s focus on this policy might set him apart from other candidates, but it could be the best way to introduce himself to the country, the official said. “He’s the sort of guy who wants to be president.”