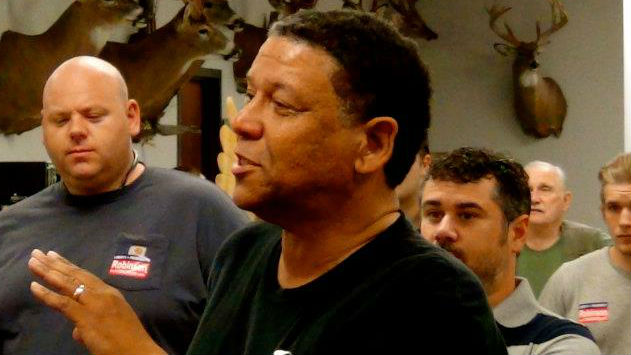 Dr. Ben Carson, the neurosurgeon, author, tea party hero, and Stuck On You star, is contemplating a presidential bid in 2016. He’s being cheered on by conservative activists—and by the National Draft Ben Carson for President Committee, a super PAC founded in 2013 to urge Carson to run. The PAC sends out emails touting Carson, gathers signatures for petitions aimed at coaxing him into the race, and it raises money from conservatives enthralled with the prospect of a Carson presidency. A lot of money. According to Federal Election Commission filings, the Draft Carson PAC has raised an impressive $12.2 million since its founding—slightly more than Ready for Hillary, the pro-Hillary Clinton super PAC. Draft Carson has, in fact, done very little besides fundraise.

The guy responsible for collecting and managing Draft Carson’s huge haul is Vernon Robinson, the PAC’s political director and a notorious, perennial candidate with a history of rabid anti-immigrant rhetoric. An African-American, ex-Air Force officer from North Carolina, Robinson has repeatedly run unsuccessful campaigns for Congress. He calls himself “the black Jesse Helms”—a comparison the director of the late senator’s foundation declared “sad.” His congressional campaign ads—one of which characterized undocumented immigrants as flag-burners and sex offenders—are so out-there that political science professors use them to illustrate mudslinging at its dirtiest. In 2006, a Republican running against Robinson in a House primary said that he “scares me.” But win or (almost always) lose, the common thread in his political career has been remarkable fundraising success, with a big chunk of the proceeds Robinson has raised flowing to a small camp of conservative fundraisers, and sometimes, himself.

Robinson was elected to the Winston-Salem, North Carolina, city council in 1997—the only elected office he’s held—and used it as a springboard to launch failed campaigns for state legislature, state superintendent, and Congress. (He won reelection in 2001 but lost in 2005 after publicly erecting a granite slab with the Ten Commandments at city hall.) In 2006, the one time he advanced to a general election in his three bids for Congress, Robinson faced incumbent Democratic Rep. Brad Miller, and mounted a memorably vitriolic, homophobic, and ad hominem campaign.

In 2003, in an open letter outlining his platform, Robinson decried “one world globalists” and “militant homosexuals,” he pledged to ban “gay Scoutmasters” and the federal income tax, and he blamed blacks’ problems on welfare and a “lack of morality.” With Miller, a popular, left-of-center lawyer, Robinson found a target for his harshly anti-gay, nativist views. He suggested that Miller was having an affair with liberal blogger and Daily Kos founder Markos Moulitsas, and said that Miller wanted to make America “one big fiesta for homosexuals and illegal immigrants.” (Miller is not gay.) Robinson set his robo-calls to mariachi music. Then, there was the ad in which he depicted the supposed horrors of liberal America as an episode of the Twilight Zone:

Miller trounced Robinson in the general election, winning by over 25 points and even carrying a deeply conservative precinct that he had not carried before and wouldn’t again. The chairman of the state GOP personally apologized to him for the nastiness of Robinson’s campaign. But despite Robinson’s repeated failure to win votes during his congressional campaigns, he excelled at fundraising. FEC filings show that in those three contests, Robinson raised a combined $5.8 million.

Consistently, Robinson relied on a tried-and-true tactic: direct mail fundraising. In each of his Congressional campaigns, he tapped a familiar stable of conservative firms with access to hundreds of thousands of names and addresses—typically, older conservatives from out of state. These consultants blasted out pleas to donate to Robinson. In the 2006 congressional contest, Robinson spent over $1 million on fundraising, out of $2 million in total campaign expenditures. (Miller spent $1.7 million on his entire campaign.) Some of the biggest recipients of Robinson’s fundraising money were direct mail companies run by the Virginia-based conservative fundraiser Bruce Eberle. His firms—Omega List, ECG Data Center—maintain massive lists of donors and rent them out to candidates. Over the course of Robinson’s congressional campaigns, Eberle has done nearly $400,000 worth of business with him.

The practice of spending money to raise money is nothing new, but Robinson has been so reliant on this tactic that some political observers wonder whether his intention is to do much more than draw in donations. “Obviously, his great skill was in pushing the right buttons to raise money,” says Steven Greene, a state politics expert at North Carolina State University. Greene says Robinson was a “strategic loser”—so extreme in his positions that he’d never have a serious shot at office, but an appealing target for the fundraising dollars of ideologues. Another NCSU professor, Andy Taylor, said in 2006 that contributing to Robinson was like “flushing money down the toilet.”

Miller, who has left Congress and says he’s over his self-diagnosed “Robinson PTSD,” notes that that money-raising firms that worked with Robinson are master button-pushers, harnessing “anything that gins up right-wing outrage” to pry loose donor cash. During the 2006 campaign, Miller and his aides concluded that Robinson was “really just raising money from a very small percentage of very, very far right-wing people…with never any thought that he’d put together a campaign with potential to win.” (Robinson did not respond to interview requests through the Draft Carson committee.)

For Miller, the Draft Carson PAC seems in keeping with Robinson’s political MO. FEC filings show that the the Carson PAC has retained many of the same direct-mail firms that Robinson worked with as a candidate, including those of Bruce Eberle. Out of the more than $12.2 million Robinson’s operation has raised, it has spent $12 million. An incredible $9.4 million of that went toward fundraising, and nearly $2 million went to companies associated with Eberle.

Draft Carson’s website lists a host of things the committee does, but aside from recruiting volunteers and soliciting petition signatures, many of its activities, such as “generating awareness and involvement through social media,” are somewhat vague. It did spend about $500,000 running radio ads during the 2014 midterm elections: One ad, which attacked the energy policy of then-Sen. Mary Landrieu (D-La.), ended with with the tagline, “Dr. Ben Carson supports Republicans, and that’s good enough for me.”

Ad-buying, both for outside races and for Carson, constituted the vast majority of the PAC’s non-fundraising expenses; the rest went to administration and appearances at conventions and events frequented by conservatives. One new thing that Draft Carson may have to pay for is rent: it recently opened up a field office in New Hampshire, and Robinson told the Washington Times that he plans to open more offices nationwide.

Robinson, meanwhile, has quietly turned his quixotic Draft Ben Carson effort into a lucrative enterprise for himself. FEC filings show that the PAC paid out over $250,000 to a consulting firm called Tzu Mahan. Buzzfeed reported in November that Tzu Mahan—its name a mashup of ancient Chinese military strategist Sun Tzu and 19th century Navy admiral Alfred Thayer Mahan—is a one-man company, run by Robinson. Robinson’s reaction, when asked about his high salary, was candid: “People get paid to do politics,” he said.