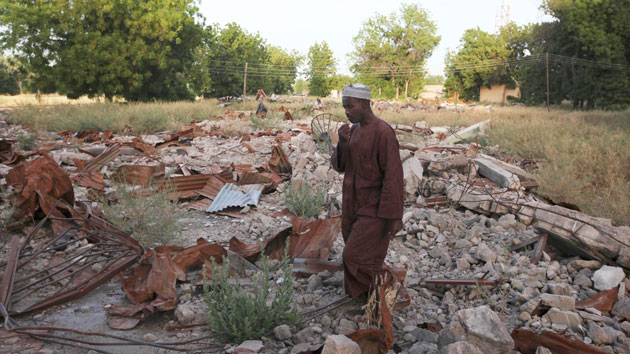 A man stands over the rubble of what used to be Boko Haram's mosque in Maiduguri, Nigeria in 2010. Before 2009, they lived in a strict, isolated, and peaceful Muslim society.Sunday Alamba/AP

Last week, the radical Islamist militant group Boko Haram massacred as many as 2,000 people in the towns of Baga and Doron Baga in northeast Nigeria—the latest bloody event in their terror spree that began in the region around 2009. Responsible for around 600 attacks and more than 3,000 dead since 2011, according to the Department of Justice (other groups have made higher estimates), the group has made international headlines for kidnapping hundreds of school girls in 2014 and bombing the United Nations’ headquarters in the Nigerian capital of Abuja in 2011. But Boko Haram has not always been known for its ruthless brutality.

Around 13 years ago, according to the United States Institute of Peace, the sect that became known as Boko Haram was a small, isolated, peaceful community dedicated to practicing strict Islamic Shariah law. In 2002, a group of extremist Muslim youths who worshipped at the Alhaji Muhammadu Ndimi Mosque in Maiduguri, or the capital of Borno state in northeast Nigeria, decided to depart from Nigerian society and the corruption they saw there and embark on a religious pilgrimage modeled after the Prophet Muhammad’s journey from Mecca to Medina. They traveled to Kanama, near the border with Niger, to create their separatist commune. Mohammed Ali was their leader, and he called upon the group to follow “true” Islamic law.

Even after Nigerian security forces in 2003 killed the majority of Boko Haram’s members over fishing rights in a local pond, the group didn’t follow up with any violent reprisals. Police killed most of its 70 members—including Mohammed Ali—in the 2003 episode, but the group managed to reconstruct itself.

The few survivors returned to Maiduguri. They were led by a young cleric named Mohammed Yusuf, who established a mosque for the group. The community offered shelter to refugees from neighboring wars in Chad, opportunities for young jobless Nigerians, and food and resources for anyone who wanted to live there. Authorities left them alone and the group operated its own governing cabinet, large farm, and police force, which upheld the community’s strict religious law.

“Although from the outset, the sect’s mission was to impose the Shari’a on Nigeria, the leadership went about its preaching peacefully,” Simeon H.O. Aloziuwa wrote in the Costa Rica-based University for Peace’s Peace and Conflict Review in 2012. A report produced by the European Parliament also described Boko Haram as “originally a peaceful Islamist movement.”

Peaceful Democracy Ambassadors, a Nigerian group committed to human rights and peace, describe Mohammed Yusuf as “a charismatic young cleric” who founded Boko Haram “as part of his push for a pure Islamic state in Nigeria.” Though it’s not certain where the group received its money during its first few years, some experts believe that Yusuf received donations from Salafist contacts in Saudi Arabia or wealthy northern Nigerians. One Boko Haram donor who spoke with the United States Institute of Peace claimed it was part of his responsibility as a good Muslim to give money to charity—in this case, Boko Haram.

There is some disagreement about when exactly the group’s turn toward violence began. Many experts believe that in 2007, Mohammed Yusuf may have ordered the death of a prominent cleric who had criticized the group.

When the group again made headlines in 2009, it was for clashes with the police after an argument about traffic regulations. Then Boko Haram threats escalated; Yusuf released viral videos speaking out against the police, which attracted a large audience in Nigeria. The government and police both tried to crack down even more aggressively on the group, arresting hundreds. Boko Haram attacked multiple police stations. When the authorities regained control of Maiduguri, they reportedly began executing hundreds of Boko Haram members.

A local journalist told a researcher at the United States Institute of Peace that police likely “disappeared” and executed over a hundred local imams and rulers, or suspected sympathizers with Boko Haram. Yusuf, the Boko Haram leader, was allegedly arrested by the army on the street and handed over to police—where he was executed within hours, according the United States Institute of Peace. The police claim he was killed while trying to run away after being interrogated. Regardless, Yusuf’s death marked another transition. The remaining members of Boko Haram fled, their locations potentially including radical camps from Algeria to Mali, only to return in 2010 more violent than ever before.

Shehu Sani, the president of the Civil Rights Congress in Nigeria, spoke with PBS’s Frontline about his assessment of Boko Haram’s turning point, which differs slightly from other research:

The [2009] killing of Mohammed Yusuf was a result of a security traffic incident. And as a result, the subsequent killing of hundreds of members of the group [after] a simple traffic conflict between the group and the police became the ignition that spiraled into the violence and bloodshed that we have been suffering the last three to four years. So we had a movement that was peaceful and that was crushed by the Nigerian army, Nigerian police, and later they went underground and became more monstrous.