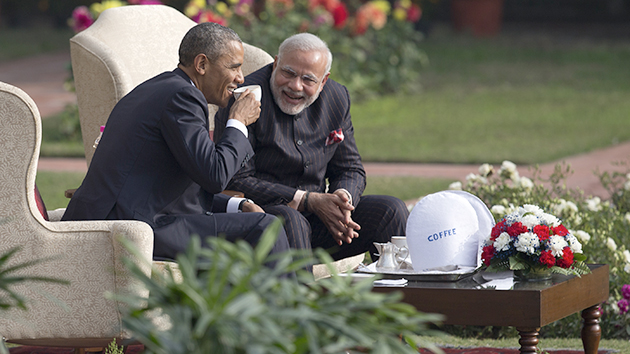 Over the weekend President Barack Obama was in India for talks with Prime Minister Narendra Modi on nuclear power, trade, climate change, and other topics. The climate piece was, if not necessarily a letdown, certainly less exciting than Obama’s wide-reaching deal with China in November. Crucially, the China deal included specific carbon emissions reduction targets; those were left out in India over Modi’s (arguably justifiable) insistence that the country be able to aggressively expand its electricity infrastructure to fight poverty.

Instead, India committed to expand its solar power capacity by 33-fold within seven years, and to work closely with the United States in advance of major UN climate talks in Paris in December. (India’s participation will be vital for the summit to produce a meaningful international agreement.)

As Bloomberg‘s Natalie Obiko Pearson noted, Obama got a first-hand taste in the trip of how important it is for India to fuel its growth with clean energy sources. India is already the world’s third-largest greenhouse gas emitter behind China and the US, and air pollution in many of its cities far exceeds even the infamous levels in Beijing and other Chinese megalopolises.

In fact, Delhi—the capital city where Obama’s meetings took place—has the world’s highest concentration of PM 2.5, according to the UN. These tiny airborne particulates can increase the risk of heart disease and a host of really awful respiratory ailments. The PM 2.5 levels in Delhi are so insanely bad that breathing the air for only a few hours can have irreversible health impacts…even on the leader of the free world.

During Obama’s three-day visit, PM2.5 levels in Delhi have averaged between 76 to 84 micrograms per cubic meter, according to data collected by India’s Ministry of Earth Sciences…Those levels translate roughly into an estimated loss of 2 hours a day in life expectancy, said David Spiegelhalter, a statistician at the University of Cambridge, who specializes in quantifying risk in a way that is understandable to the public.

Obama was there for three days, so that’s six hours off his life. That is profoundly terrifying. It also underscores how, for developing countries, the need to stem pollution from power plants is about much more than solving the long-term problem of global warming. It’s about addressing an urgent pubic health crisis.