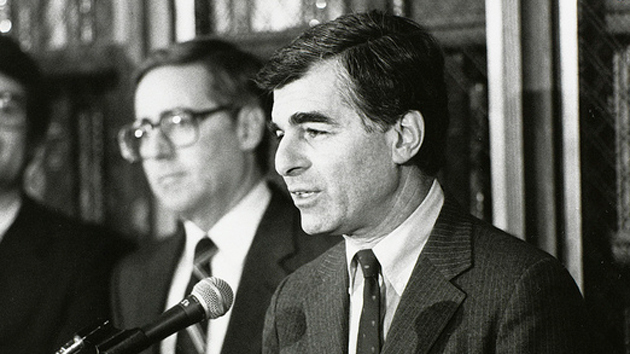 Listen, youngsters, there was once a time in American politics when a politician with a good shot of becoming president threw away his big chance because he believed he should—and could—remain above the fray. Yes, he really thought that. His name was Michael Dukakis. And today he is mostly known as a political loser.

Yet in his day, Dukakis was the popular and successful governor of Massachusetts, who, as the son of Greek immigrants, was widely seen as the personification of the American Dream. After winning the Democratic presidential primary of 1988—vanquishing such political warriors as Al Gore, Dick Gephardt, Jesse Jackson, Joe Biden, and Paul Simon (the senator, not the singer)—Dukakis was for a time the front-runner in the race against a sitting vice president named George Herbert Walker Bush. In May of that year, Dukakis led the dynastic prince by 16 points in one poll. In August, he had a 17-point advantage. And the veep branded himself the “underdog” of the race.

But Dukakis made a big error. When the mud started flying, he acted as if he were at afternoon tea.

In a new NBC Learn documentary, aptly titled Above the Fray: The Lessons of Dukakis ’88, Will Rabbe, a producer for MSNBC’s Hardball, chronicles this supersized miscalculation. (Connection declared: I’m a regular guest on Hardball.) For many who lived through the excruciating final months of the campaign, as the Bush machine (operated by Lee Atwater, a consultant known for his down-and-dirty, street-brawling style of politics) pummeled Dukakis and he blandly responded with policy pronouncements, this film will bring back cringe-inducing bad memories.

At the start of the documentary, Dukakis, who has always come across as a thoughtful, intelligent, and decent fellow, says, “In retrospect, I’m not sure we had the kind of strategy we should have. But it was certainly an eminently winnable campaign at the time.” A viewer already familiar with this sad tale can’t help but mutter, “No shit.”

The film chronicles how negative attacks undid the Duke. At first, it was Gore. Trailing Dukakis in the Democratic primary contest, Gore, then a senator from Tennessee, claimed the governor was soft on crime, pointing to a Massachusetts state furlough program for criminals, under which two felons freed on weekend passes committed violent crimes. Dukakis didn’t pay the blast much mind. But Gore’s assault came too late in the game and did not help him overtake Dukakis.

Bush and Atwater did a much better job. As soon as Dukakis became the presumptive Democratic nominee, with Republicans in a near panic due to Dukakis’ lead in the polls, the Bush campaign began its offensive. Bush, too, focused on the furlough program, calling Dukakis naive and dangerous. Dukakis, for his part, was mystified by the attack. Dozens of states had similar programs, as did the federal government. He didn’t see how he could be tarred by what had been noncontroversial program, just because there had been a few mistakes. No, he insisted on running a positive campaign, focusing on his own message and emphasizing his accomplishments in Massachusetts and his plans for the nation’s future. In the movie, he tells Rabbe, “I had made the decision that I was not going to respond to the Bush attack campaign…We certainly had no plans for dealings with these attacks. That was my decision and no one else’s. It turned out to be a very bad decision.”

Before the political conventions, Bush kept hammering on the furloughs and made Willie Horton, a furloughed Massachusetts murderer who raped a woman during a release, famous. Dukakis recalls, “My view was I’m not going to pay attention to any of this stuff.” After the convention, Republicans, including President Ronald Reagan, raised questions about Dukakis’ physical and mental health. There was no reason to do so; it seemed a concerted and nasty campaign to fuel unfounded speculation about Dukakis. In the documentary, Dukakis recalls his aides advised him not to get into a fight with Reagan over his health. And, once again, Dukakis was on the defense. “I was dogged every day by press questions about the whole thing,” he recalls. His lead dropped 8 points in a week. In one of the best moments captured by the film, Dukakis attempts to smother the health rumors by going on a three-mile “power walk,” with athletic socks pulled up high and swinging hand weights.

Other attacks kept coming. He was soft on defense. A Bush ad suggested Dukakis opposed practically all military spending and mocked images of Dukakis riding in a tank. He was soft on crime. He didn’t favor the death penalty. The attacks were relentless. “Shame on me for not effectively dealing with it,” Dukakis now says. “And I didn’t.” At the time, as Dukakis notes in the film, crime was high throughout the United States, but Massachusetts had a good record in dealing with crime and the homicide rate in Houston (Bush’s home town) was six times greater than that in Boston. “Why didn’t I say that?” he asks. “Well, I wasn’t going to pay any attention to the attacks.” Anti-Dukakis ads flooded the airwaves with a mug shot of the scary-looking and African American Willie Horton.

You get the picture. And so does Dukakis, who is refreshingly candid in the documentary. I’ll spare you a full recounting of the second debate, at which Dukakis botched a question about capital punishment when asked if he would favor the death penalty were his wife raped and murdered. To be polite, he was far too calm, abstract, and rational. (At that moment, I agreed to jump out of an airplane with a friend after the election was over.)

At the end of this well-made and insightful film, a reflective Dukakis says to Rabbe, “We didn’t do what, I’m sorry to say, you have to do in these campaigns. And that’s one of the great lessons of ’88, sadly. And that is you’ve got to anticipate the attack campaign. And you have to have a carefully thought-out strategy for dealing with it in advance of when it happens…I obviously made huge mistakes.”

They were mistakes that did not go unnoticed. Four years later, when Bill Clinton, a candidate quite vulnerable to attack ads, was the Democratic nominee, his campaign staff (including George Stephanopoulos, who had been a key Dukakis staffer) operated a war room designed to respond quickly to any assault. Clinton and his team had learned what Dukakis had not.

You can watch the full documentary here: