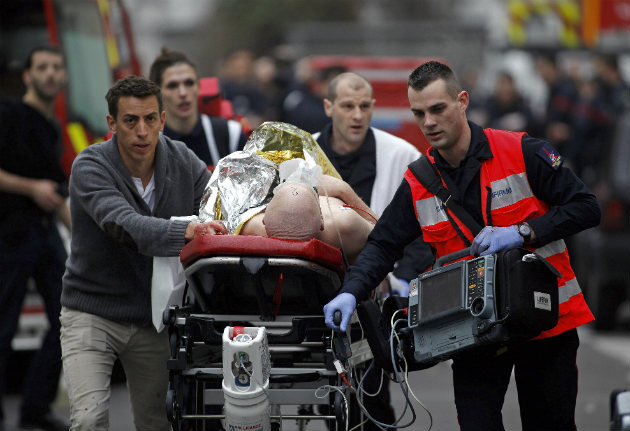 An injured person is evacuated from the offices of the French satirical newspaper Charlie Hebdo in Paris on Wednesday.Thibault Camus/AP

This story is developing, and being updated below.

Hooded gunmen carrying automatic weapons opened fire at the offices of French satirical publication Charlie Hebdo on Wednesday, killing at least 12 people and seriously injuring 10. The Guardian is reporting that three attackers are still at large, after they were seen escaping in a car.

French President François Hollande said the shooting was “undoubtedly a terrorist attack.” France has since raised its terror alert to the highest level.

Map showing the location of the #CharlieHebdo offices and the direction the attackers fled http://t.co/N28zmSCwVV pic.twitter.com/q9EYxtcjJy

According to several news reports, the gunmen were heard shouting “we have avenged the Prophet Muhammad” as they stormed into the magazine’s offices armed with Kalashnikov rifles. Charlie Hebdo, a newspaper known for its caustic, no-holds-barred cartoons, has previously sparked ire from some Muslims for its satirical take on Islam, including several caricatures of the Prophet Muhammad. (The publication of the likeness of the prophet is forbidden under Islam). In 2011, the magazine was firebombed after publishing an issue “guest-edited” by the prophet.

Several prominent cartoonists, including Jean Cabut and the magazine’s editor in chief, Stephane Charbonnier, were among those killed.

Since news broke of the attack this morning, the hashtag #JesuisCharlie has been spreading on Twitter in support of the victims. The US Embassy in France also changed their Twitter profile photo to include the hashtag.

I am a Muslim, and I dislike the way they portraited our prophet. But NO! I never support an action harming a living, so #JeSuisCharlie .

A tragic day for the freedom of speech #jesuischarlie pic.twitter.com/ZkIOXpHeSq

Cartoonists around the world have also shown their solidarity with Charlie Hebdo with powerful images:

I am devastated by what just happened in France. #CharlieHebdo pic.twitter.com/IxEbScqYFh

Can’t sleep tonight, thoughts with my French cartooning colleagues, their families and loved ones #CharlieHebdo pic.twitter.com/LqIMRCHPgK