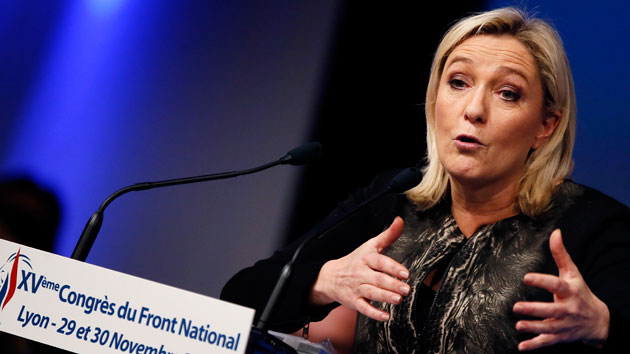 Shortly after gunmen burst into the Paris offices of Charlie Hebdo and murdered a dozen people, Marine Le Pen, the leader of Front National, a far-right, anti-immigrant party, called for France to revive the death penalty, which it abolished in 1981. In an interview with France 2, she declared that capital punishment should be part “of our legal arsenal,” and she vowed to hold a national referendum to restore it if she is elected president in 2017.

La Pen’s remarks were not surprising. While the manhunt for the Charlie Hebdo killers was underway, she used the horrific attack to justify her own political war on Islam. And it did seem that her party, which promotes a hard-line anti-Islam and anti-immigrant message, was in a good position to gain politically.

But, it seems, Le Pen and the suspected terrorists, Cherif Kouachi and Said Kouachi, who were killed by French authorities on Friday, shared a view: they both wanted death for the gunmen. When the Kouachi brothers were cornered in a printing plant in Dammartin-en-Goele, northeast of Paris, a French lawmaker who had been inside the SWAT command post told a television station that the brothers had told French negotiators they “want to die as martyrs.”

This was not surprising. The goal of martyrdom has motivated numerous jihadists to conduct murderous action. Suicide bombers, the 9/11 plotters, and others seek to die in pursuit of their cause and believe that there will be a reward on the other side.

So the best punishment, when such criminals are apprehended, would be to deny them martyrdom and force them to wait decades, maybe half a century, to meet their violence-supporting maker—preferably in a small, isolated cell for all that time. Recruiters of jihadist killers might have a tougher time selling a decades-long stint in prison than a glorious exit in a blaze of gunfire or a high-profile state execution that would receive attention around the world.

One key, though dubious, argument for the death penalty is that it deters would-be killers. But terrorists like the Charlie Hebdo murderers are not deterred by death. They desire their own demise. Putting aside the moral considerations regarding state-sponsored executions, a sober (and, yes, vengeful) calculation would be to keep such evildoers alive and miserable for many years. Perhaps that would make them less compelling  inspiration for potential terrorists. Le Pen’s call for reviving the death penalty is not geared toward preventing bloody events; it is designed to exploit them.

Unfortunately, in the Charlie Hebdo case, the supposed killers got their death wish. It would have been more gratifying—and probably more beneficial—if they had been captured, placed on trial, convicted, and forced to rot in jail for the rest of their lives.