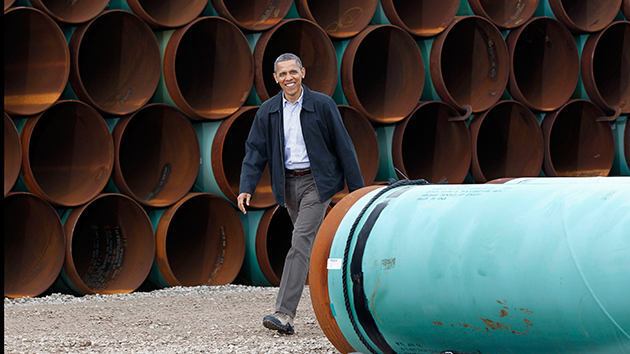 President Barack Obama is planning to veto a bill that would force approval of the controversial Keystone XL Pipeline, according to the Associated Press:

White House Press Secretary Josh Earnest said that the president’s position hasn’t changed since November, when pipeline supporters in Congress last attempted to push through its approval—an effort that fell just one vote shy of the 60 votes needed to pass the Senate. Obama was adamant then that approval for the pipeline come not from Congress, but from the State Department, which normally has jurisdiction over international infrastructure projects like this one. A final decision from State has been delayed pending the outcome of a Nebraska State Supreme Court case, expected sometime early this year, that could alter the pipeline’s route.

Senate Majority Leader Mitch McDonnell and other Republicans have vowed to make passage of a new Keystone XL bill a top priority for the new year, and they seem prepared to move forward with a vote later this week. The bill is likely to pass. But the challenge for Republicans is to garner enough support from Democratic senators to achieve the 67 votes required to override a presidential veto. Yesterday, Sen. John Hoeven (R-N.D.) told reporters he had just 63 votes.

Even if Congress fails to override Obama’s veto, it still won’t be the end of what has become the flagship issue for US climate activists; the possibility remains that the State Department could still approve the project. But the Obama administration may be leaning against approval. In December, the president said the pipeline is “not even going to be a nominal benefit to US consumers.”