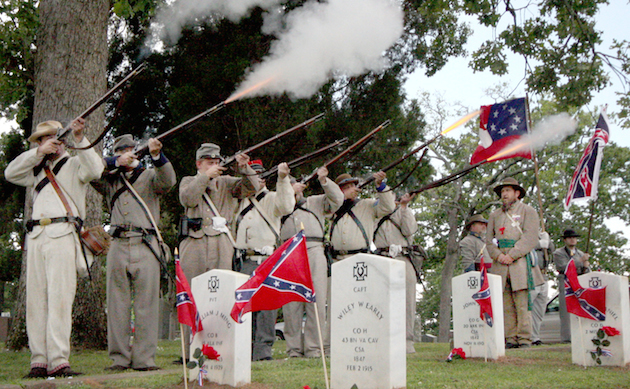 Arkansas, Mississippi, and Alabama are the only three states in the country that celebrate Robert E. Lee on the same day as the Martin Luther King Jr. federal holiday. Their reasoning for the combo celebration is that the two have birthdays just a few days apart—never mind the, uh, conflict of interest.

Today, Arkansas’ elected officials had the opportunity to pass a bill seeking to separate the two commemorations. By doing so, Arkansas would join Georgia, Florida, and Virginia, which honor Lee—but not on MLK Day.

But this morning, Arkansas representatives struck down the bill with a chorus of nays. Below are a few choice quotes from opponents of the bill explaining why:

2. “You’ve got MLK parades all over the nation, but no one celebrates Lee! Well, a lot of people do, a very large crowd.”

bill to separate recognition of MLK and Robert E Lee due up at 10am. Those opposed already here. #arleg #ARnews pic.twitter.com/bS7QRd4uZr

3. “This bill is out to change our constitution.”

5. “I really wish we could all celebrate a non-separate, but equal holiday.”

6. “You wouldn’t celebrate Christmas in July!”

7. “Why are we doing this? We are chasing a non-problem.”