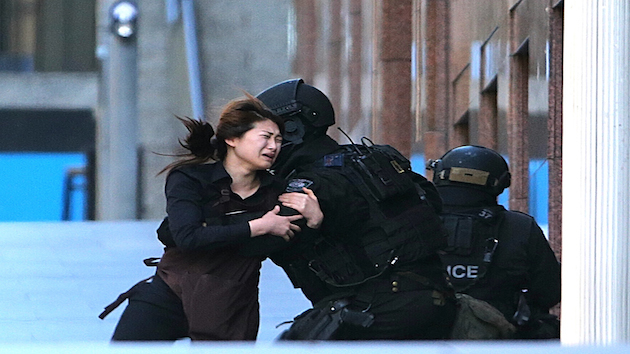 A hostage runs to armed tactical response police officers for safety after she escaped from a cafe under siege at Martin Place in the central business district of Sydney, Australia. Rob Griffith/AP

Tweeters offering to escort Australian Muslims who fear racially or religiously motivated attacks in response to a hostage situation in Sydney have adopted the hashtag #illridewithyou, which has quickly spread across social media. This support for Australian Muslims comes after a black flag with Arabic writing on it was seen displayed on the cafe window where the siege continues to unfold.

If you reg take the #373 bus b/w Coogee/MartinPl, wear religious attire, & don’t feel safe alone: I’ll ride with you. @ me for schedule.

The Guardian reports that Tessa Kum started the hashtag after she saw this story on Twitter:

The idea quickly caught on, and Sydney residents have been using #illridewithyou to publicly reach out to anyone who may want a partner to travel with as authorities work to put an end to the standoff:

I’m a semi regular commuter on the #mandurah line. If you see me #illridewithyou. I’ll be wearing this scarf. pic.twitter.com/sWSpbDcOsd

Practical thing: I’ve made a temporary sticker for my bag so people who need me can spot me #illridewithyou pic.twitter.com/aVldEn9wVU

Thanks for protecting my sisters #illridewithyou pic.twitter.com/Qy9l0lN1qB

As of 9:05 AM EST, five hostages have either escaped or been released. Muslim leaders, who condemned the “criminal act,” are urging residents stay calm.