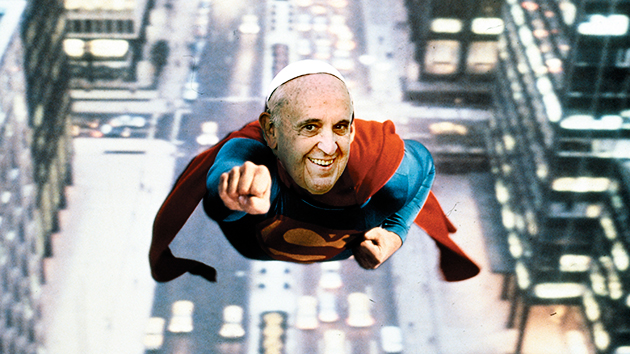 Wednesday’s historic deal between the United States and Cuba was noteworthy for a lot of reasons—and a fascinating one that’s emerged has been the role of Pope Francis. It’s been reported that the Pope sent personal letters to President Obama and President Raul Castro enjoining them to reconsider the situation; then, he invited US and Cuban officials to the Vatican in October to talk things out. In the days since the announcement—which His Holiness greeted with “warm congratulations”—the Vatican has enjoyed wide credit as one of the biggest influences in breaking the decades-old standoff.

But those surprised at Pope Francis’ role in this negotiation shouldn’t be: While many popes in the past have involved themselves in geopolitics, few have been as proactive—and as willing to move beyond rhetoric and into the actual work of diplomacy—as Francis. Vatican-watchers have characterized this pontiff as a bold statesman, unafraid to use his popularity and the reach of his office in the service of a particular brand of soft power diplomacy. Jim Yardley at the New York Times summed it up well, writing, “What has changed under Francis—or has been restored—is a vision of diplomatic boldness, a willingness to take risks and insert the Vatican into diplomatic disputes.”

While Wednesday’s deal may have been his biggest success to date, he’s managed to pack some ambitious diplomatic moves into his young reign as the Bishop of Rome. Here’s a highlight reel:

Israel-Palestine: One of Pope Francis’ most dramatic diplomatic moves to date came this June, when he invited the heads of state of Israel and the Palestinian Authority to the Vatican for an unprecedented prayer meeting. Then-Israeli President Shimon Peres and Palestinian President Mahmoud Abbas prayed together, talked privately, and planted an olive tree in the gardens of the Vatican. They gushed about the pontiff afterward, with Peres calling him a “bridge builder of brotherhood and peace.”

There was no concrete result of the talks, though the degree of goodwill shown between the two sides surprised observers of the conflict. In a later interview, Pope Francis revealed that “99 percent” of his subordinates in the Vatican were against his idea, but gradually came around to it.

China: Mending relations with China has long been a priority for the Vatican: It’s no secret that the communist government is staunchly anti-religion, and the country’s 12 million Catholics are not allowed to recognize the pope as the head of the church. (The party appoints its own bishops to a state-sanctioned church, which really pisses off the Vatican.) When Pope Francis’ plane was allowed to enter Chinese airspace this August—past pontiffs have been forced to take a detour—it was reported as a huge deal.

But Pope Francis, undaunted, has taken baby steps towards gaining favor with Beijing. Last week, he turned down a meeting with Tibet’s Dalai Lama—a seemingly out-of-character move which communicates how serious his intentions are. (Beijing publicly applauded the move.) His calculus, it seems, is that establishing warmer ties with Beijing could lead to decreased persecution of Chinese Catholics, and provide a foothold for the church’s expansion there.

Islamic extremism: Pope Francis has made the fight against Islamic fundamentalism central to his diplomatic efforts. Past popes have, too, but where Pope Benedict XVI was blunt—he once made a controversial speech suggesting Islam was evil and violent—Pope Francis has tried to take a softer touch. He recently visited Turkey, where he held a joint press conference with Turkish President Recep Tayyip Erdogan, and called on all Muslim leaders to condemn ISIS. At the Blue Mosque, Pope Francis bowed his head silently while the Grand Mufti of Istanbul recited a Muslim prayer.

A significant point of concern for Pope Francis is the fate of the Middle East’s small but ancient Christian community, which ISIS has targeted. He said in Istanbul that he would not abide “a Middle East without Christians.”

Syria: Pope Francis has also strongly denounced the civil war raging in Syria, a country with a sizable Christian minority. He traveled to neighboring Jordan this past spring to push for peace, and in 2013, he called for a global day of “fasting and peace” ahead of escalating air strikes in Syria. But the strikes went as planned, and conflict continues; if anything, the pontiff has been chided for not being forceful enough on the issue. One observer at TIME called the failure to secure peace in Syria the pontiff’s “one big mistake.”

Korea: Add Pope Francis to the long list of parties trying to secure peace on the Korean peninsula. In August, he took a five-day visit to South Korea, which is 10 percent Catholic, where he advocated for reconciliation with the North. “You are brothers who speak the same language,” he told an audience there. “Think of your brothers in the North. They speak the same language and when, in a family, the same language is spoken, there is a human hope.” Pope Francis is concerned with the persecution of the few thousand Catholics in North Korea; the North Korean government declined the Vatican’s request to visit. On the day he arrived in South Korea, the North fired missiles into the sea minutes before he touched down in Seoul.

Guantanamo: As if the Pope didn’t have enough intractable conflicts to resolve, John Kerry will reportedly be in Rome this week to enlist the Vatican’s help with another long-standing political issue: closing the Guantanamo Bay prison.