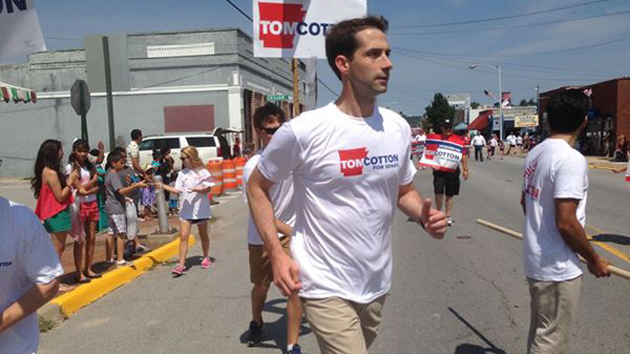 GOP Rep. Tom Cotton defeated two-term Democratic Sen. Mark Pryor on Tuesday, bringing Republicans one step closer to winning control of the Senate. Cotton hammered Pryor repeatedly on Obamacare, which remains deeply unpopular in Arkansas even though the legislation has helped hundreds of thousands of residents get health insurance.

But it’s foreign policy where Cotton could make his biggest impact in the Senate. “Groups like the Islamic State collaborate with drug cartels in Mexico who have clearly shown they’re willing to expand outside the drug trade into human trafficking and potentially even terrorism,” Cotton said during a September tele-town hall. “They could infiltrate our defenseless border and attack us right here in places like Arkansas.” Three weeks later, he put his money where his mouth was, airing an ad featuring footage pulled straight from an ISIS propaganda film called Flames of War.

This is what you can expect more of from Cotton, an Army veteran who first rose to fame after writing a letter to the editor of the New York Times demanding that everyone who worked on a story on a top-secret terrorist tracking program be tried for treason. During his brief tenure in the House of Representatives, he was one of the few House Republicans to vocally back an intervention in Syria.

Over the last four years, civil libertarians and non-interventionists have made big gains in the GOP, led by congressional newcomers like Michigan Rep. Justin Amash. But Cotton’s win marks a victory for the neo-cons—a young voice with a good-looking resume who should be in Washington for a while. Just take a look at former Texas Rep. Ron Paul’s reaction:

Republican control of the Senate = expanded neocon wars in Syria and Iraq. Boots on the ground are coming!

It was Cotton who rose to speak against Amash’s 2013 amendment that would have curtailed the NSA’s surveillance powers. “We are at war,” he said. “You may not like that truth, I wish it weren’t the truth, but it is the truth. We are at war. Do not take away this tool from our warriors on the front lines.”

Among Beltway conservative scribes, Cotton’s political arc has taken on an almost singular importance, with writers at places like the Weekly Standard salivating over his small-town credentials in True Grit country. As I reported when I visited Cotton’s hometown of Dardanelle in September, I found the local hero in Yell County isn’t Cotton; it’s fourth-district Democratic nominee James Lee Witt. But it didn’t matter. Mark Pryor voted for Obamacare, he probably voted for Obama, and now he’s looking for work.

Anyway, here’s your next Senator from Arkansas eating a watermelon: