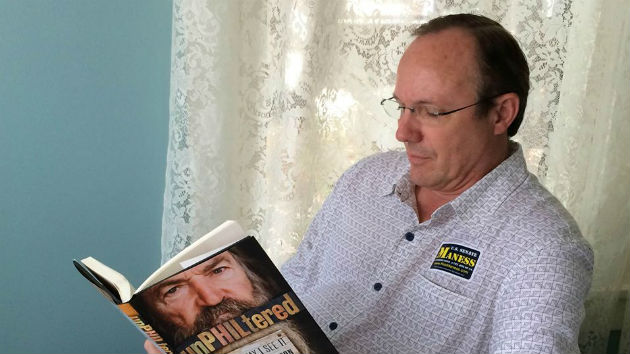 Tea party Senate candidate Rob Maness has found an issue he believes will resonate with Louisiana voters: a 30-acre, oil-burping sinkhole. During a debate with Democratic Sen. Mary Landrieu on Tuesday, Maness was asked about a lawsuit over coastal erosion filed against 100 oil and gas companies last spring by a local flood protection board. For too long, the retired Air Force colonel warned, oil, gas, and chemical companies had had their way with Louisiana, with little government oversight and often at great cost to residents: “The families of Bayou Corne—it’s been over 600 days since they’ve been under evacuation.”

As I reported last summer, the town of Bayou Corne, in rural Assumption Parish, has been under a mandatory evacuation order since August 2012, when a sinkhole suddenly formed from an abandoned salt-mining cavern. The hole has grown to 30 acres, and the presence of potentially dangerous gases underneath the community—and bubbling on the bayou—has kept residents away. In August, Texas Brine, the company that had capped and abandoned the cavern, settled a class-action lawsuit with 269 residents for $48.1 million, but avoided any acknowledgment of wrongdoing.

Perhaps wary of upsetting Louisiana’s powerful oil and gas interests, politicians have largely avoided the sinkhole. Republican Gov. Bobby Jindal dropped by for a press conference in 2013, but has never returned. But last month, Maness became the first candidate for statewide office to visit the sinkhole. He’s even touting the endorsement of one of the main sources for my story, Bayou Corne resident Mike Schaff: 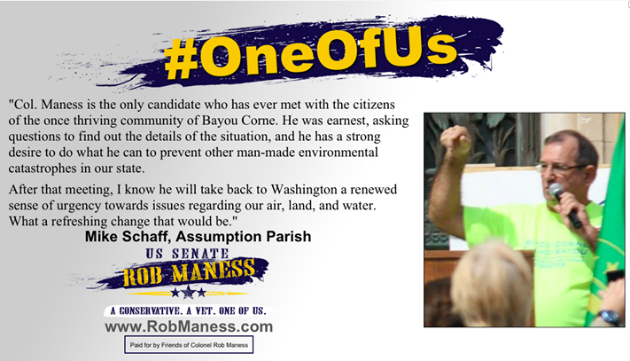 Maness lags behind his two main opponents in the polls, but he will probably fare well enough to ensure that neither Landrieu nor Republican Rep. Bill Cassidy will clear the 50-percent threshold needed to avoid a runoff. He has also picked up the endorsement of prominent conservative activists, including former Alaska Gov. Sarah Palin and Red State founder Erick Erickson—which makes his choice of an environmental disaster as a campaign wedge issue all the more noteworthy.