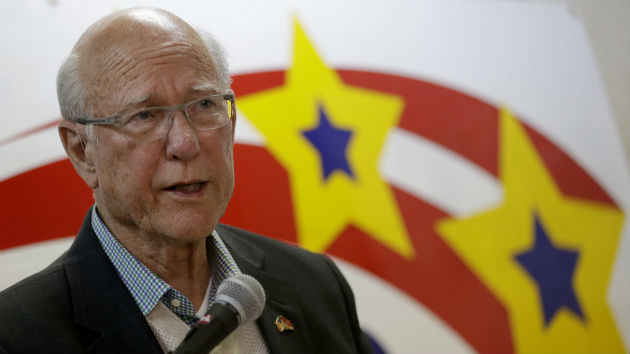 Sen. Pat Roberts (R-Kan.) on Tuesday avoided the indignity of becoming the only GOP incumbent senator to lose his seat in the 2014 midterm elections. The Associated Press called the race for Roberts at 11:10 p.m. ET.

Roberts was dogged from the start by evidence that he lived in suburban Virginia and not in the state he represented in Congress. (His listed residence in Kansas was a home that belonged to two supporters.) He overcame a spirited challenge by a tea-party-backed doctor named Milton Wolf in the GOP primary. And then Roberts, who is 78, battled back from a sizable deficit against independent Greg Orman, a businessman who conveyed an anti-Washington message and refused to say which party he’d caucus with if elected.

The Kansas Senate race got even more interesting in September, when the Democrat on the ticket, Chad Taylor, dropped out, leaving only Orman and Roberts in the race. Polls at the time showed Orman with as much as a 10-point lead.

When Roberts’ vulnerability against Orman became apparent earlier this fall, Roberts’ campaign staff was replaced with prominent Republican strategists. Reinforcements in the form of outside money swooped in, painting Orman as a Democrat in disguise and as an Obama ally. (Orman had previously made a brief run for Congress on the Democratic ticket.) The constant attacks on Orman paid off, and Roberts has now secured his fourth term in the US Senate.