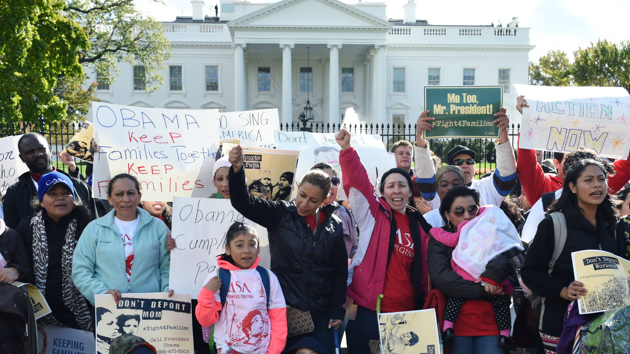 As early as this week, President Barack Obama is expected to announce an executive order that would give some 5 million undocumented immigrants a respite from deportation. Part of the order, according to early reports, will involve reforms to Secure Communities, a program that requires police to share arrestees’ fingerprints with federal immigration officials, who can turn around and use the information to deport suspects who are here illegally. Change would a good thing, here, because while the program—which began in 2008 under President George W. Bush and was expanded under Obama—has deported some serious criminals, it has screwed over a lot of other people. From the start, immigrant rights organizations slammed “S-Comm” as a costly, ineffective program that tramples on people’s civil liberties. Even Homeland Security chief Jeh Johnson has suggested that it may need an overhaul. Here’s a rundown of what the program does—and why so many people hate it.

S-Comm sweeps up serious criminals… When local police book someone, that person’s fingerprints are transmitted to the FBI to determine whether the arrestee is a fugitive or a former convict. Under Secure Communities, those prints go to Immigration and Customs Enforcement (ICE), which checks to see whether the suspect is undocumented. If so, it orders the local cops to detain him or her for potential deportation. More than 3,000 American counties now participate. Of the more than 2 million immigrants deported on Obama’s watch, more than 306,000 came to the feds’ attention through Secure Communities, which has led to the deportation of more than 288,000 convicted criminals.

And immigrants just trying to live and work… Local police share fingerprints with ICE when a suspect is arrested—not convicted. Which means that even though the purported aim is to deport criminals, people who are never charged or convicted often get the boot. “Federal officials have held people whose worst alleged violation was selling tamales without a permit or having a barking dog,” California Assemblyman Tom Ammiano said last year. “Even crime victims have been deported.” More from Elise Foley of the Huffington Post:

The program has ensnared parents driving without a license because they need to work and can’t get authorization to drive in their state. It has caught young people arrested for small levels of drug possession. Many of those caught are people who have previously been deported but came back to the US to work or be with their families—immigrants who could be aided by a policy that put less emphasis on deporting repeat immigration law violators.

Of the people deported through S-Comm between 2008 and 2013, 21 percent were never convicted of a crime.

And American citizens… According to a 2011 study by researchers at the University of California-Berkeley, thousands of United States citizens have been swept up by S-Comm—something the study’s authors hadn’t anticipated. “What we’re finding is that ICE is arresting and then investigating,” one of the authors informed a reporter. If you’re brown, you’d better watch your back. The same study found that 93 percent of the arrestees ordered to be detained by ICE were Latino, even though Latinos make up about 77 percent of undocumented immigrants in the United States. “There is a concern that police officers working in areas that have Secure Communities in their local jails may have an incentive…to make pretextual arrests of persons they suspect to be in violation of immigration laws,” notes the Immigration Policy Center. Members of the Congressional Hispanic Caucus have urged the White House to scrap the program entirely.

But it doesn’t reduce crime: The program has had “no observable effect on the overall crime rate,” according to a study released in early September.

In fact, it may actually make your community less safe… Research has shown that undocumented immigrants living in counties that participate in Secure Communities are afraid to report crimes or come forward as witnesses for fear of deportation.

And it’s costing you money: The program requires local authorities to hold arrestees longer than they otherwise would, meaning a higher bill for taxpayers. For example, Secure Communities cost Los Angeles County law enforcement an extra $26 million per year, according to a 2012 report. Washington state’s King County determined that it cost county taxpayers $3 million annually.

By the way, S-Comm was supposed to be optional: The Department of Homeland Security—ICE’s parent agency—originally touted S-Comm as voluntary—states and localities could opt out. But in late 2010, after numerous jurisdictions chose to do just that, ICE made it clear that was virtually impossible. Because the FBI already gets the fingerprints for arrestees, ICE can access them regardless. In 2011, Rep. Zoe Lofgren (D-Calif.) demanded an investigation into whether DHS intentionally misled the public. “I believe some of these false and misleading statements…were made recklessly, knowing that the statements were ambiguous and likely to create confusion,” she wrote in a letter to DHS. Some localities have devised other ways to limit their cooperation with ICE. A total of 59 jurisdictions have said they will no longer comply with ICE requests to hold detainees so that the feds can come pick them up. Two states—California and Connecticut—have enacted measures prohibiting law enforcement from honoring ICE requests to hold immigrants unless those people have committed serious crimes.

So how might the administration fix this thing? We won’t know the details until Obama makes his executive order, but Vox‘s Dara Lind reported in May that one option being considered was to limit the program to so-called Level 1 criminals—those who have committed one “aggravated felony” or two felonies. However, Lind notes, “independent data shows that immigrants can be labeled Level 1 criminals for everything from disturbing the peace to cashing a check with insufficient funds.” In any case, such a change could mean 20,000 to 50,000 fewer deportations per year.