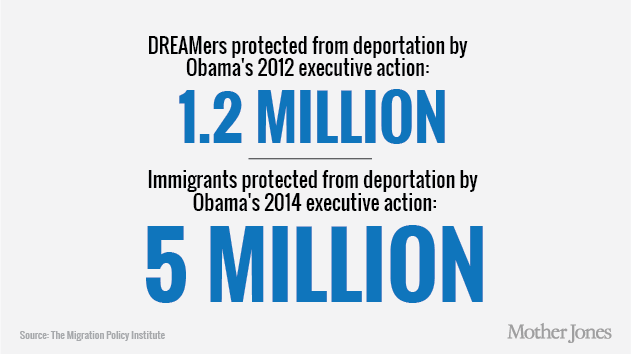 On Thursday evening, President Barack Obama announced his hotly anticipated executive action on immigration, which will keep nearly 5 million undocumented residents from being deported. Even though the sweeping measure has elicited threats of retaliation from congressional Republicans, Obama said he moved forward because comprehensive immigration reform is unlikely to go anywhere in the GOP-dominated Congress next year.

“I know some of the critics of this action call it amnesty,” the president said in his speech. “Well, it’s not. Amnesty is the immigration system we have today—millions of people who live here without paying their taxes or playing by the rules, while politicians use the issue to scare people and whip up votes at election time. That’s the real amnesty—leaving this broken system the way it is.”

A year and a half ago, a bipartisan immigration bill passed in the Senate but died in the House. The bill likely had enough Republican and Democratic votes to pass in the House, but Speaker John Boehner, catering to his tea partiers, refused to bring the measure to the floor. If signed into law, the legislation would have provided legal status to about 11 million undocumented immigrants. Here’s a look at who benefits most from Obama’s executive action—and who has lost out, thanks in part to GOP obstructionism.

DREAMers: The president’s move will broaden the 2012 Deferred Action for Childhood Arrivals (DACA) program, which had temporarily protected from deportation some 1.2 million young people who were brought into the country illegally as children—as long as they entered the country before June 15, 2007. Now, children who came to the United States before January 1, 2010, will be eligible to apply for deferred-action status. The so-called DREAMers (named after the proposed Development, Relief, and Education for Alien Minors Act) can apply for employment visas, though there is no direct path for them to lawful permanent residence or citizenship. To the dismay of immigration activists, the executive action does not extend benefits to the hundreds of thousands of parents of DREAMers.

Noncriminal undocumented immigrants: Obama’s executive action shifts all of the Department of Homeland Security’s enforcement resources toward deporting undocumented immigrants who are criminals—instead of deporting undocumented immigrants who pose no such threat. “We’re going to keep focusing enforcement resources on actual threats to our security,” Obama said. “Felons, not families.” The president’s order also guts an existing program called Secure Communities, which requires police to share arrestees’ fingerprints with federal immigration officials, who can use the information to deport suspects who are here illegally, even if they turn out to be innocent. The program will be replaced with another devoted to deporting only those convicted of criminal offenses.

Immigrants with pending cases: As part of the president’s executive action, the Justice Department will implement immigration court reforms to quickly process the massive backlog of cases.

The Border Patrol: Obama’s executive action shifts resources to the border, though it doesn’t specify how much more money will be flowing to Customs and Border Patrol agents and Immigration and Customs Enforcement along the southern border. (The Senate bill would have allotted some $30 billion over 10 years to hiring at least 19,200 extra border patrol agents.)

Entrepreneurs: The executive action will make it easier for foreign entrepreneurs—who show a potential to create jobs in the United States and attract investment—to immigrate to the US, though there was no mention how the administration will achieve this.

Losers
Undocumented immigrants who have been here since 2011: The failed Senate immigration bill would have allowed immigrants without papers—and their children and spouses—to apply for provisional legal status, if they have been in the United States since the end of 2011. These immigrants could have eventually applied for citizenship.

Ag workers with papers: The Senate bill would also have created a new temporary work visa called the W visa for farmworkers. The new program would have permitted these laborers to eventually apply for permanent resident status without an employer’s sponsorship. Less-skilled non-farmworkers could have also applied for a W visa.

Other types of legal immigrants: The Senate bill would have set up a new system that would grant visas to up to 250,000 foreigners a year. Foreign nationals would have accumulated points based on their skill level, education, and employment background. The new system would have cleared the current backlog of applicants for family-based or work visas.

Immigrant detainees: If the Senate bill had okayed by the House, unaccompanied minors, mentally disabled immigrants, and other vulnerable people going through the detention and deportation process would have been granted free legal representation. The bill would have limited the use of solitary confinement in immigrant detention facilities.