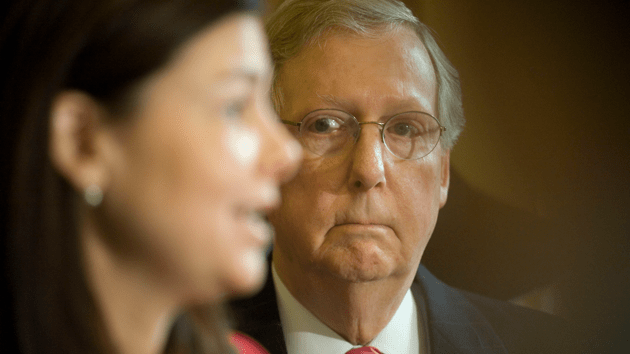 We have entered the McConnellsance.

After 18 months, this YouTube video, and a staggering $73 million in campaign and outside spending, Mitch McConnell, a senator who was sometimes more despised in his deep-red home state than President Barack Obama, has won reelection against Democratic challenger Alison Lundergan Grimes.

Polls rarely showed Grimes ahead of McConnell, despite his dismal approval ratings. The fundamentals always favored McConnell in coal county, which bled Obama voters like no other region in the country in 2012. Grimes kept the race close during the summer by distancing herself from Obama, promising to fight for the minimum wage, vocalizing her support for the coal industry, standing in front of coal miners, and shooting a gun. Meanwhile, McConnell, after vanquishing a tea-party challenger (who was caught lying about attending a cock fight) in the GOP primary, consolidated support from the far-right wing of his party and amassed millions from K Street lobbyists.

Obamacare and its runaway success in covering the state’s uninsured was another key issue in this campaign. Not that the candidates talked about it much. McConnell, who is beholden to a party laser-focused on repealing Obamacare, avoided taking a coherent position on the law through verbal acrobatics. He said that a Republican Senate probably couldn’t repeal the law. He also vowed to gut the law (a few days later). And he insisted that if Obamacare was trashed the state’s popular healthcare website could still function—though not really. While McConnell debated himself on this issue, Grimes replied with silence.

McConnell, the Senate minority leader, will ascend to Senate majority leader, if Republicans take the Senate, and he will achieve what his associates say is his lifetime dream, amassing even greater power to confront and defy the president.