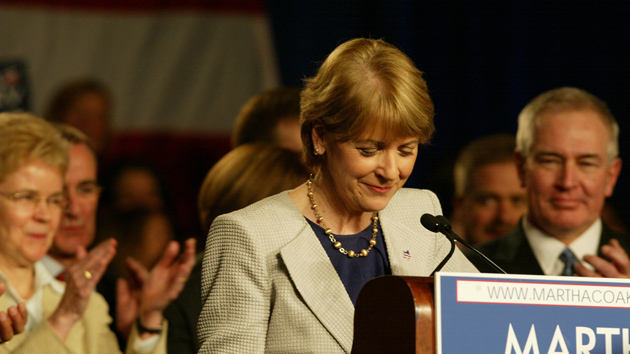 Four years after losing a Senate special election to Scott Brown, Massachusetts Democratic attorney general Martha Coakley is on the brink of defeat in another race that was hers to lose. Both Fox News and ABC have called the governor’s race for Republican Charlie Baker, but Coakley has pledged to fight on—at least until Wednesday morning.

The result, if it holds, is a gut-punch for Democrats in the Bay State, where Coakley once led by 29 points. As the race tightened in the campaign’s final month, heavyweight surrogates came to Massachusetts to stump for the nominee. But in the end, not even Elizabeth Warren and Hillary Clinton could save Coakley from another electoral defeat.

The easy takeaway here is that Coakley is a spectacularly bad candidate, woefully out of touch with Massachusetts voters. “You could call her the Bill Buckner of politics, if she even knew who the Red Sox were,” as Politico Magazine‘s Ben Schreckinger put it in October. But if you really know who the Red Sox are, you’d know that Buckner’s famous gaffe came only after the rest of the team had already blown the game. And that’s sort what happened here—the loss stemmed from a confluence of factors, not a singularly flawed candidate.

Massachusetts is overwhelmingly Democratic, but in many ways the state government has moved on from the policy fights facing the rest of the country. Although Baker, who lost to Gov. Deval Patrick in 2010, has been critical of the Affordable Care Act, the issue lacks the resonance it has in a place like Louisiana, because Massachusetts already had a law mandating health insurance. It was even written by a Republican. Baker is also pro-choice and supportive of same-sex marriage (his gay brother starred in a campaign ad). He’s hardly a cookie-cutter national Republican.

Coakley avoided the kind of face-palm moments that dogged her in 2010, when she went on vacation during the campaign and blanched at the prospect of shaking hands outside Fenway Park “in the cold.” Here she is talking to tailgating Patriots fans before Sunday’s game against Denver—outside, in the cold:

Massachusetts is the kind of place that periodically elects moderate Republican white dudes to positions of power—Republicans had held the governor’s mansion for 16 years before Deval Patrick won in 2006. You could argue that any Dem could have lost in a wild year like 2010 (plenty of other blue-state Democrats lost too), and in 2014 she ran up against voter fatigue with the outgoing Democratic governor. Plus, she had a long primary that wasn’t settled until September, giving Baker months to define the race on his own terms. The most charitable thing that could be said is that she has been spectacularly unlucky.

She probably shoulda won, though.