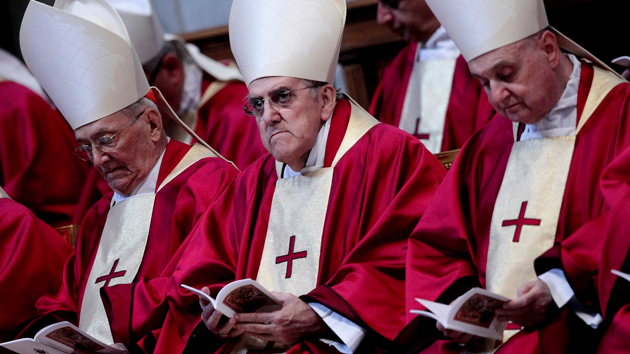 Update 12/2/2014: On December 1, a three-judge panel from the Seventh Circuit Court of Appeals ruled that religious freedom exemptions do not give the Fort Wayne-South Bend Diocese immunity from Emily Herx’s sex-discrimination lawsuit. Herx’s lawsuit can now go forward in US District Court.

When Emily Herx first took time off work for in vitro fertilization treatment, her boss offered what sounded like words of support: “You are in my prayers.” Soon those words took on a more sinister meaning. The Indiana grade school where Herx was teaching English was Catholic. And after church officials were alerted that Herx was undergoing IVF—making her, in the words of one monsignor, “a grave, immoral sinner”—it took them less than two weeks to fire her.

Herx filed a discrimination lawsuit in 2012. In response, St. Vincent de Paul School and the Fort Wayne-South Bend Diocese, her former employers, countered with an argument used by a growing number of religious groups to justify firings related to IVF treatment or pregnancies outside of marriage: freedom of religion gives them the right to hire (or fire) whomever they choose. But in this case, the diocese took one big step further: It’s arguing that religious liberty protects the school from having to go to court at all.

“I’ve never seen this before, and I couldn’t find any other cases like it,” says Brian Hauss, a staff attorney with the American Civil Liberties Union Center for Liberty. The group is not directly involved in the lawsuit but has filed amicus briefs supporting Herx. “What the diocese is saying is, ‘We can fire anybody, and we have absolute immunity from even going to trial, as long as we think they’re violating our religion. And to have civil authorities even look into what we’re doing is a violation.’…It’s astonishing.”

“I’ve never seen this before, and I couldn’t find any other cases like it.”

The key legal question in Herx’s case is whether she was fired for religious reasons or her firing was an illegal act of sex discriminations.

Title VII of the Civil Rights Act bans employers from discriminating on the basis of race, color, religion, sex, and national origin. An exemption in that law allows religious institutions to favor members of their own faith during the hiring process. But there’s no religious exemption for sex discrimination—which is how Herx is framing her dismissal. As proof, she showed that the diocese had never fired a male teacher for using any type of infertility treatment. In response, the diocese asserted that it would fire a male teacher who underwent fertility treatments against church teachings—it just hasn’t done so yet. In early September, a federal judge ruled that there was enough evidence on both sides of the dispute for a jury trial.

That’s when the diocese launched its radical new legal strategy.

The diocese argued that a trial on this question would violate its freedom of religion and appealed the judge’s decision to a three-judge panel on the 7th Circuit Court of Appeals. “[If] the diocese is required to go through a trial,” attorneys for the diocese and school argued, it would “irrevocably” deny Fort Wayne-South Bend the benefits of religious protection. Herx’s attorneys are fighting the appeal.

“What the diocese is saying is, ‘We can fire anybody, and we have absolute immunity from even going to trial.'”

“Employers try to appeal these decisions all the time. But this is unusual because of the incredibly broad claim to a religious exemption they’re making,” says Susan Deller Ross, a professor at the Georgetown University Law Center who has written about Title VII and worked on sex discrimination cases. Thomas Brejcha, the president of the Thomas More Society, a conservative religious liberty legal group, called the move “creative, venturesome, and unusual.” He adds, “I’m very interested to see what happens.”

Louise Melling, a deputy legal director at the ACLU, was more critical: “It’s an unusual and extreme argument, to be saying the court doesn’t even have the legal authority to ask whether this was, in fact, sex discrimination. I can’t imagine they would prevail on that. It’s too extreme.”

Than again, Melling says she never would have predicted the recent wave of cases in which religious institutions asserted that they have an expansive right to discriminate. One of those cases was Burwell v. Hobby Lobby—the Supreme Court case that struck down the contraception mandate in the Affordable Care Act. The ACLU has also seen a climb in the number of Christian schools arguing that Title VII allows them to fire women who undergo IVF or become pregnant outside of marriage, or to fire employees who engage in same-sex relationships. “Hobby Lobby was just one case in this wave,” Melling says.

Douglas Laycock, a professor at the University of Virginia Law School, says the diocese’s assertion is a “perfectly sensible argument.” Laycock, who has successfully argued numerous religious liberty cases before the Supreme Court, notes there is precedent for immunizing certain organizations from trial, although not necessarily under Title VII’s religious protections. “I think it’s going to be a hard sell,” he says. “But I don’t know that it’s ‘extreme.'”

“It all feels so medieval.”

Eventually, a case like Herx’s could reach the Supreme Court. There are at least four other high-profile lawsuits like Herx’s under way at the federal level. Four women—Jennifer Maudlin, a former cook at an Ohio religious community center; Teri James, a former financial-aid specialist for San Diego Christian College; Shaela Evenson, a former Catholic school teacher with the Helena Diocese in Montana; and Shanna Daly, a former teacher with St. Elizabeth Ann Seton Catholic School in Florida—are suing their former employers for firing them because they became pregnant outside of marriage. Daly claims she was fired because she refused to get married until the church annulled her previous marriage. Each of these women filed their cases within the last two years.

“It’s striking that this is still an issue, that people are still firing women for getting IVF and being pregnant and unmarried,” Melling says. “It all feels so medieval.”

It is also hypocritical, according to Herx. Other teachers in the diocese, she claims, have undergone hysterectomies, vasectomies, and tubal ligations without any employment consequences, even though the church teaches that deliberate sterilization is immoral. Herx and her doctor made sure that none of the embryos created for her infertility treatment were intentionally destroyed. Herx’s school principal approved sick days for her IVF treatment. And the diocese’s health insurance plan, which the diocese directly administers without the help of a third party, paid for Herx’s visits to the fertility doctor and the anesthesia she required.

Ross agrees that the appeals court is unlikely to buy into the diocese’s argument. “That would have an extreme impact,” she says. “But with law you can never say never.”