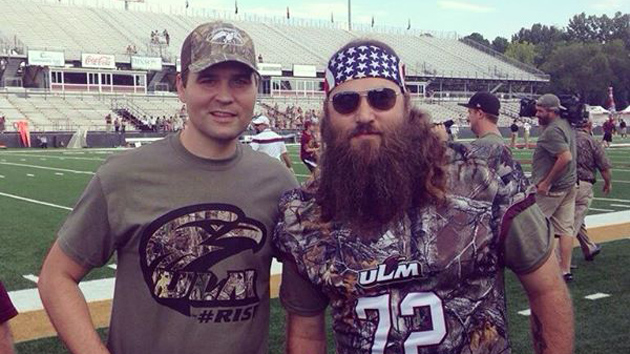 Godlessness is leading the United States down a path toward “tyranny and death,” according to Louisiana Republican congressional candidate Zach Dasher. A nephew of Duck Dynasty patriarch Phil Robertson, Dasher is challenging incumbent GOP Rep. Vance McAllister in the November election. He made the comments in a 2012 episode of his personal podcast, Willing to Think.

He returned to the subject at the end of the episode:

We will only regress if we shut our mouths. Tyranny will get its foothold—if it already doesn’t have it—and in the end, there will be mass carnage and mass death. It’s inevitable. ‘Oh, Zach, you are such an overreactor; you’re like Alex Jones.’ Look: I’m here with a philosophy. This is no conspiracy theory; this is a philosophy rooted in historical fact. Every society that has shut down people from discussing things about politics God, faith, when you silence people, every time that happens in a society, you know what happens? Tyranny and death. Every single time.

In another episode of the podcast, Dasher blamed rejection of God for a rise in anxiety disorders. “I know it’s not politically correct, but there is a huge element of depression and anxiety disorders that is wrapped up in what I’m saying today,” he said. In September, BuzzFeed‘s Andrew Kaczynski reported on comments Dasher made in other episodes of Willing to Think, in which the candidate blamed the Sandy Hook massacre on atheism. (He also argued that the popular millennial acronym “YOLO” is corrosive because it promotes an atheistic disregard for the afterlife.)

Dasher has put his faith front and center during the race. The campaign headquarters in West Monroe features an envelope taped to the outside of the glass door, instructing supporters to “leave your your prayers or scriptures.” In an appearance on Fox News in June, he told Sean Hannity, “My platform begins with God.”

Robertson, who supported McAllister during the special election for the seat in 2013, jumped ship after McAllister was caught on tape kissing a female staffer and now backs his kin. At a Lake Charles fundraiser, he referred to the first-time candidate as “my little nephew who came from the loins of my sister.”