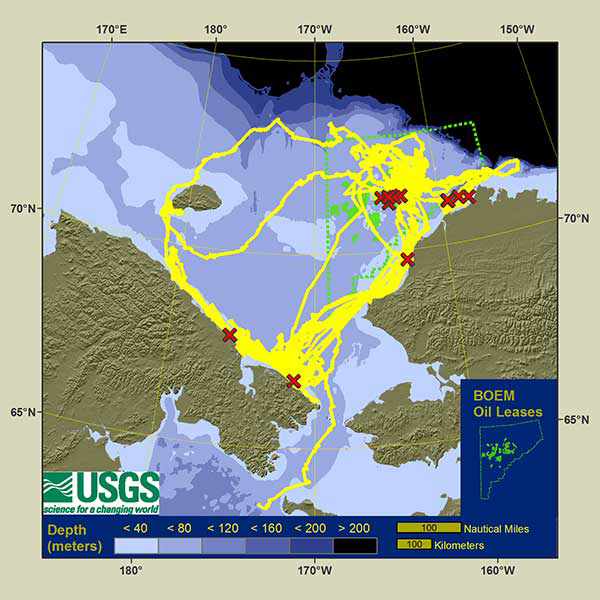 Yellow lines show the movement of radio-tracked walruses in 2013; the green highlighted section is where offshore drilling leases are available. USGS

Remember that jaw-dropping photo from last week that showed 35,000 walruses crammed onto a narrow strip of land because they couldn’t find enough space on the disappearing Arctic sea ice? Turns out melting ice isn’t the only thing the walruses have to worry about.

Last month, the energy blog Fuel Fix reported on details of Shell’s newest plans to drill for oil in the Arctic. The company has a history of failure in the Arctic since it first got a federal green-light to explore there in 2012. Now they’ll be heading back out next summer for another try, with up to six new wells in the Chukchi Sea.

The ocean expanse north of Alaska where Shell wants to drill is the most popular hangout for Alaskan walruses, as the map above, from a US Geological Survey study of walruses last year, shows. The yellow lines show the movements of a group of walruses over a two-week period in July 2013; red X’s mark where researchers deployed radio tags on the walruses. The green outline indicates the cluster of Arctic oil drilling lease locations administered by the federal Bureau of Ocean Energy Management, including those Shell is eyeing. The wells would be upstream of Hanna Shoals, a biologically rich shallow shelf that tends to hold sea ice longer than other areas.

The Shoals are vital walrus habitat, especially as climate change diminishes sea ice throughout the Arctic, said Margaret Williams, Arctic programs director for the World Wildlife Fund. Risks to the walruses (and other marine life, for that matter) include disturbance by ship traffic and the fallout from oil spills. Spill cleanup is particularly challenging in icy waters, and the nearest Coast Guard station is across the state in Kodiak.

“It’s an amazing place that is full of life, with a very rich food chain,” Willaims said. If oil and gas drilling goes forward, “you have a huge potential mess.”