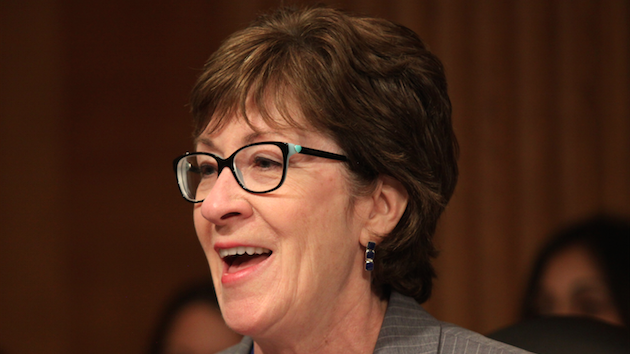 Late last month, Republican Sen. Susan Collins of Maine released a new campaign ad bragging that she tried to avert the government shutdown crisis last year, when tea party GOPers held the federal budget hostage in an effort to take down Obamacare. “On all three votes on those two days, Susan Collins voted against shutting down the government,” the ad claims. That’s not quite right.

Collins couldn’t have voted against shutting down the government because there was never a direct vote on whether or not to close the government at the end of September 2013, explains Sarah Binder, an expert on legislative politics at the Brookings Institution. At the time, the GOP-controlled House would not agree to a government funding bill that was acceptable to President Barack Obama and the Democratic-controlled Senate. That impasse led to the government shutdown when the two sides couldn’t reach an agreement. “Did she explicitly vote against the shutdown?” Binder says. “There was not such an explicit direct vote.”

Instead, Collins thrice voted for bills that would have kept the government open only if Obama and Senate Democrats agreed to defund or delay Obamacare.

Here’s the background. In late September of 2013, House Republicans passed a short-term spending bill that would have stripped funding from Obama’s new health insurance program, even though Obama and Senate Democrats had warned Republicans that they would never support any measure that dismantled the Affordable Care Act. When the Senate took up that bill, Democrats voted to remove that provision defunding Obamacare. Collins voted with every other GOPer in the Senate to keep the anti-Obamacare measure in the bill funding government operations.

The House GOPers tried again. They took up that Senate-approved bill, added new language that would partially delay implementation of Obamacare, and passed it. Back over in the upper chamber, senators again voted along party lines to reject the Obamacare measure, with Collins and her fellow Republicans once more voting to keep an anti-Obamacare poison-pill provision in the spending bill.

The story is not over yet. The House Republicans tried a third and final time. Now they voted for a spending bill that included a one-year delay of Obamacare’s individual mandate, and a provision that would have blocked members of Congress and their staffers from receiving government subsidies for health insurance they obtained through the Affordable Care Act. The Senate Democrats once more stripped the anti-Obamacare amendment from the spending legislation—and Collins and her fellow GOPers again voted to preserve it.

Experts on congressional procedure say that even though there was no direct vote on shutting down the government, Collins can claim she tried to prevent a shutdown during this dramatic legislative face-off by voting for a spending bill (even one with a provision unacceptable to the president and the Senate majority). “You can always argue that following the vote the other side would have given up,” explains Scott Lilly, an expert on federal budget policy at the left-leaning Center for American Progress. Binder echoes this: “The House version of the [spending bill] would have kept the government open—had Democrats gone along.” A spokesman for the Collins campaign makes much the same argument. But that is the same as saying one voted for legislation that would have prevailed had not the majority opposed it.

At the 11th hour, House Republicans asked the Senate to negotiate a final version of the spending bill. Collins and her fellow Senate GOPers voted in favor of negotiating, but Dems rejected the move because Senate Majority Leader Harry Reid (D-Nev.) had conditioned negotiations on the House Republicans approving a government funding bill without any anti-Obamacare measures. No such bill passed, and the government ran out of money.

The resulting shutdown caused all manner of chaos, including the suspension of a nutrition program for pregnant women and babies, the temporary shuttering of national parks, and the furloughing of tens of thousands of federal employees.

Eventually, Republicans caved and agreed to a bill without anti-Obamacare measures—which allowed outside observers to wonder if the GOP attempt to defund Obamacare via this spending bill, an effort Collins supported, had all been for naught. But Collins did lead the bipartisan group of senators who crafted the temporary agreement to fund the government and end the shutdown, a fact her campaign has been touting as evidence of her moderate record. The truth, though, about her role in this episode of government dysfunction—she cast no vote against the shutdown—is more murky than her campaign’s heroic account.