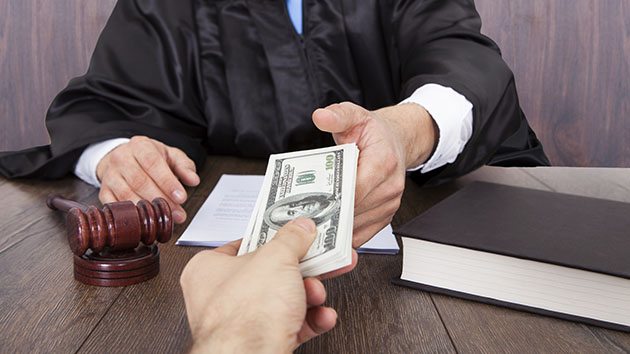 Update, Tuesday, January 20, 2015: The Supreme Court is scheduled to hear oral arguments in Lanell Williams-Yulee v. The Florida Bar at 11am ET today.

The US Supreme Court has agreed to hear a case that could overturn 30 states’ bans on judges personally seeking campaign contributions. In Lanell Williams-Yulee v. The Florida Bar, a county-level judicial candidate was publicly reprimanded by the Florida Supreme Court in May and forced to pay $1,860 in court costs for signing a fundraising letter during the 2009 election, according to her petition. The court also rejected her argument that the decision violated her First Amendment rights, saying that the state’s ban is constitutional “because it promotes … the integrity of the judiciary and [maintains] the public’s confidence in an impartial judiciary.”

As Williams-Yulee notes, this issue is quite common in that there are hundreds of judicial elections each year. In 2011 and 2012 there were high court elections in 35 states that contested 75 open seats, along with an additional 243 intermediate appellate court races in 29 states. These races are becoming increasingly more expensive: During just those two years, state high court, appellate and lower court judicial candidates raised more than $110 million, according to the National Institute On Money In State Politics (state judicial candidates raised just $83 million total in the 1990s). Justice At Stake, a nonpartisan judicial election watchdog group, points out that 20 states have surpassed records for judicial election spending since 2000. Independent spending on judicial elections is also booming, with more than $24 million being spent in the 2011-12 cycle compared to just $2.7 million a decade earlier.

Of the 39 states that hold judicial elections, 30 have some sort of ban, and 22 are blanket bans similar to Florida’s.

Retired US Supreme Court Justice Sandra Day O’Connor talked with Mother Jones this summer about problems with money pouring into judicial elections. O’Connor opposes judicial elections in general—she’d prefer judges be appointed after being nominated by a commission and then stand for retention elections—because she says increasing amounts of money in the races skews the information voters see about judges that “often comes from misleading and even nasty campaign ads.”

“[Campaign contributions] impact the extent to which citizens believe that judicial decisions are based on the law rather than other factors, such as to whom a judge might feel beholden,” O’Connor said. “In my mind, judicial campaign support—whether it involves direct contributions or independent spending—automatically creates an appearance of impropriety when supporters are involved in court cases.”