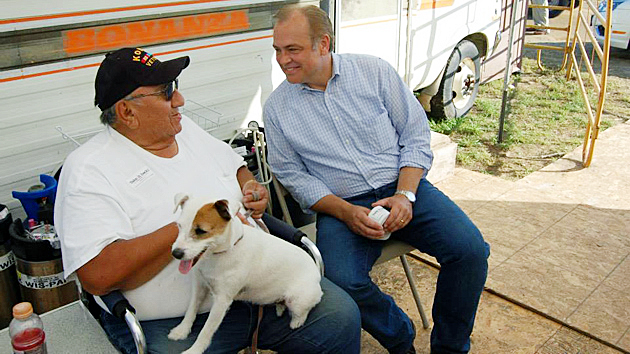 Earlier this year, Kevin Killer collected 1,193 signatures to put a referendum on the ballot to change the name of Shannon County, South Dakota. The county, which includes much of the Pine Ridge Indian Reservation, is named for former Dakota Territory Supreme Court Chief Justice Peter Shannon, who was instrumental in the passage of the Dawes Act, which separated American Indians from their land. The proposed new name: Oglala Lakota County, after the tribe that calls Pine Ridge home.

The initiative needs a two-thirds majority to pass. In a county where 93 percent of voters are American Indians, Killer, a Democratic state representative, believes the name change could be a boon for turnout. That would be good news for Democrats in Washington, DC, who see South Dakota as the place where they could save their Senate majority. Rick Weiland, a progressive Democrat, is locked in a tight three-way race against former Republican Gov. Mike Rounds and former Republican Sen. Larry Pressler (who is running as an independent). Weiland is banking on Native Americans—and a string of new reforms that make it easier to vote on reservations—to push him across the finish line.

It wouldn’t be the first time American Indians have come through for Democrats in South Dakota. In 1996, after Pressler pushed through a law that stopped the transfer of federal lands back to tribes and forced the tribes to pay taxes on any new land they acquired, a group of tribal leaders held a conference to formally denounce Pressler and endorse Tim Johnson, his opponent. Johnson won, and six years later, amid a GOP wave, he was reelected by 524 votes. It wasn’t until 5 a.m., when Shannon County became the last part of the state to report its votes, that Democrats felt comfortable declaring victory.

Weiland, a former aide to Sen. Tom Daschle (D-S.D.) who has campaigned on reservations and made his opposition to the Keystone XL pipeline a central part of his outreach efforts, needs to run up huge margins among American Indian voters this time around. Killer believes the Shannon County referendum could give voters a reason to show up.

“There were about 30 people that told us no for whatever philosophical reason, and two that told us no because their first names were ‘Shannon,'” Killer said. “But for the most part everybody’s really enthused about it.”

But Weiland stands to benefit even more from changes to how elections are conducted on reservations. White South Dakotans have historically gone to great lengths to prevent Native Americans from voting. South Dakota Republicans blamed Johnson’s victory on massive voter fraud by American Indian voters, and launched an investigation into registration fraud. The probe, which started before the election was even over, turned up just one conviction. But one year later, Rounds signed into law one of the nation’s first laws requiring voters to present ID.

In 2004, the New York Times reported that one county, Buffalo, had gone so far as to reimplement the 19th-century British concept of rotten boroughs in order to ensure white dominance. As the paper explained in an editorial, “Buffalo County’s three county commissioner districts were drawn so that one had just 101 people, none American Indians; a second had 353 people, with a functional white majority; and the third had 1,493 Indians jammed into it.”

But over the last two years, voters on reservations have scored breakthroughs through the courts and in Pierre. The 2002 Help America Vote Act provided federal funding to replace antiquated voting mechanisms and make polling locations more accessible to people with disabilities. South Dakota counties resisted the idea of using federal funds to subsidize satellite early voting and registration locations, however. Finally, in 2013, a group of American Indian activists filed a federal civil rights complaint with the Department of Justice. In response, the state made the funds available for satellite early voting locations in five counties that contain Indian reservations, no questions asked. The implications for turnout are obvious.

“You don’t have to be a rocket scientist to know that if you give someone a chance to vote 46 days, you’re gonna get a higher number than if it’s only one day,” said O.J. Semans, executive director of Four Directions, a nonprofit that has promoted American Indian voting rights.

In October, tribal leaders scored another victory. After four residents of the Pine Ridge reservation filed a lawsuit, Jackson County agreed last week to open a satellite office for early voting. Previously, residents had to drive 27 miles to cast a vote—an obstacle complicated by the fact that 1 in 4 residents of the reservation don’t have cars.

Now, for the first time ever in South Dakota, Semans says, residents of the state’s three biggest reservations will be able to vote early and in-person at federally funded satellite voting locations.

“I would estimate that normally tribes turn out maybe 40 to 45 percent,” Semans said. This time, “I would look at maybe tribes turning out at maybe 70 to 90 percent.”

South Dakota isn’t the only state where the native vote could make the difference. In Alaska, embattled Democratic Sen. Mark Begich is banking his reelection on huge turnout among Native Alaskans, who have greater access to the polls than in years past. There were 82 early voting locations in Alaska in 2012. In 2014, there are 161 early voting locations in rural Alaska alone.

But some of the obstacles that discourage native voters still remain in South Dakota. It wasn’t until after the deadline for finalizing voting arrangements passed that Semans discovered Buffalo County had passed up the HAVA funds. As a result, the 1,200 residents of Fort Thompson on the Crow Creek Sioux reservation will have to drive 52 miles round-trip to vote early in the mostly white county seat of Gann Valley.