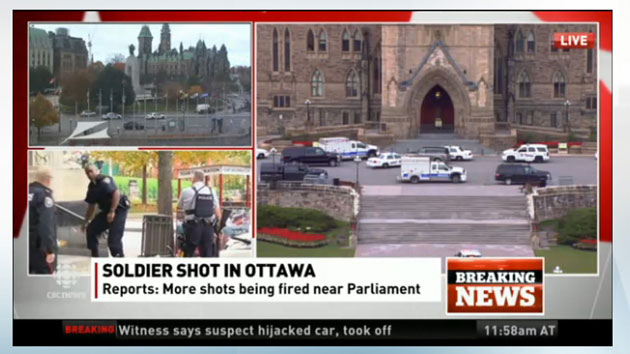 Downtown Ottawa is under lockdown as police investigate reports of shootings in two locations: the National War Memorial and Parliament Hill. Police have confirmed that, contrary to earlier reports, no shooting incidents occurred at the Rideau Centre shopping mall.  Police have confirmed reports that an unknown gunman shot and killed a soldier, Corporal Nathan Cirillo, standing guard by Canada’s National War Memorial with a rifle, then moved on to Canada’s Parliament Hill and Centre Block and opened fire, resulting in the ongoing lockdown at Canada’s Parliament building. A shooter wounded a security guard near Parliament Hill before he was shot, according to the CBC. Canadian Parliament member Tony Clement tweeted that at least 30 shots were fired just before 10 a.m. during a caucus meeting where most MPs were located; Clement and two colleagues, Mark Strahl and Kyle Seeback, remained inside the building under lockdown. The prime minister, Stephen Harper, was rushed out of the building.

Readers should note that breaking news stories often contain inaccuracies. Many details of the attack remain unclear, and even initial information from law enforcement sources in this type of situation can be wrong. Check back for updates. (Also see how Canadian TV news coverage has put American cable news coverage to shame.)

Shots fired during caucus meeting. at least 30 shots. MPs piled out. I’m safe with 2 colleagues but we’re still at risk…

The Globe and Mail‘s Josh Wingrove captured live footage of the shootings inside the Parliament building:

Wingrove described the scene in a firsthand account: “Once police were halfway down the hallway, gunfire erupted again—an estimated two dozen shots that ended with a motionless body falling from a doorway just in front of the library. It was unclear who the person was. Guards briefly appeared to check for a pulse before beginning a search of the rest of the building.”

According to reporters on the scene, the atmosphere calmed down around 10:30 a.m., but the Parliament building remained on lockdown and those inside were being told to stay away from the windows. Many fled the building after hearing shots in multiple corridors, some escaping down scaffolding being used for renovations, according to the Telegram. A helicopter arrived on scene just before 11:30 a.m., according to CBC reporter Stu Mills.

The Ottawa-Carleton District School Board told parents not to come to schools to pick up their children, who were also on lockdown in their classrooms. Some reporters claimed that cellphone signal is going in and out of service. Police said they suspect that two other shooters might be on the loose, and police reportedly are going door-to-door searching for a suspect. (Reports of additional shooters in these sorts of situations are often wrong.)

#Ottawa RT “@StuMillsCBC: Now back to slater, MP telling us he’s heard there are or were 3 shooters”

A car, now on Wellington outside east block, stops. Two guys get out. At least one heads for the war memorial with a rifle.

RT @crimegarden: UPDATE: Police track two more possible suspects, one fleeing on foot near Chateau, the other on motorbike. #ottnews 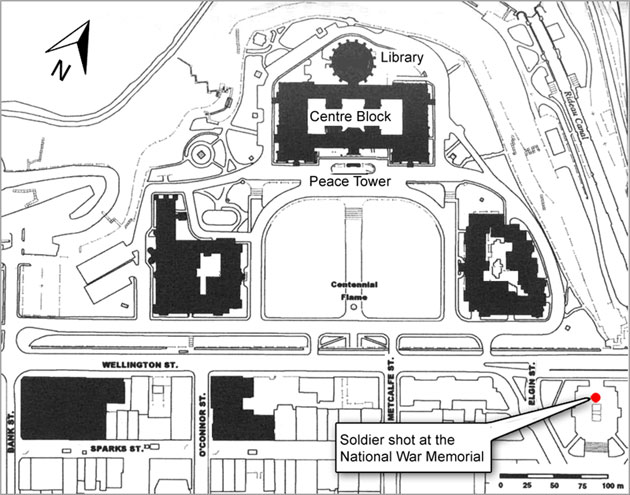 And CNN posted this map of the area where the attacks have been reported:

Map of areas where Ottawa shootings were reported: National War Memorial, near the Rideau Centre and Parliament Hill. pic.twitter.com/NcfNCR5VCV

(Ottawa)—The Ottawa Police Service and Royal Canadian Mounted Police (RCMP) responded to reports of shooting incidents this morning in the downtown area. Police can now confirm that incidents occurred at the National War Memorial and on Parliament Hill.

Contrary to earlier reports no incident occurred near the Rideau Centre.

One shooting victim succumbed to injuries. He was a member of the Canadian Forces.  Our thoughts and prayers are with him and his loved ones.

Next of kin notification is underway and as such, the victim’s identification will not be released.

One male suspect has also been confirmed deceased. There is no further update on injuries at this time.

This is an ongoing joint police operation and there is no one in custody at this time.

Ottawa residents are asked to stay away from the downtown area while the investigation continues.  If you work in one of the downtown buildings, follow the instructions from the building management you are in.

A number of RCMP and Federal government buildings are also closed to the public; as is Ottawa City Hall and all Ottawa Police stations.

POTUS condemned the outrageous attacks, and reaffirmed the close friendship and alliance between the American and #Canadian people 2/3

UPDATE 5, Thursday, Oct 23, 11:20 a.m. EST: Canadian officials have confirmed that the identify of the shooter in yesterday’s incidents was Michael Zehaf-Bibeau, a Canadian citizen born in 1982. Zehaf-Bibeau was shot and killed at the scene by Sergeant-at-arms Kevin Vickers. Multiple lines of inquiry are opening up in the United States and Canada into the identity of the gunman, his apparent radicalization, and what intelligence communities in both countries knew about him prior to the attacks. CBC News is reporting that Bibeau had a criminal record in Quebec going back 10 years, including charges of drug possession, robbery, and “uttering threats.” CTV News reported Wednesday night that “the federal government had recently seized his passport to prevent him from traveling abroad,” according to an anonymous source. CBS News first reported Bibeau’s name on Wednesday evening, attributing the information to US officials. 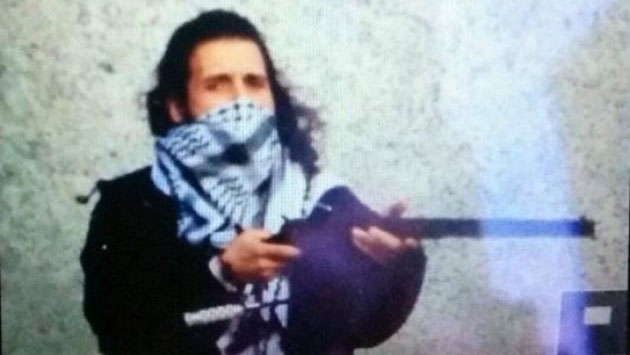 According to CBC News, police confirmed this image of Bibeau, tweeted by a French ISIS account. Twitter