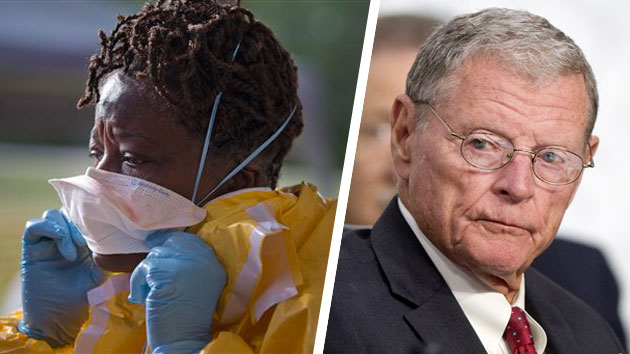 Update: On Friday, Sen. James Inhofe (R-Okla.) said in a statement that “after careful consideration,” he would be lifting his hold on $750 million in emergency Ebola funds.

House legislators have approved the transfer of $750 million toward the fight to contain Ebola, which continues to rapidly spread across West Africa. The figure is still below the $1 billion request from the Department of Defense—and the budget battle is not over. It is currently holed up in the Senate dependent on Sen. James Inhofe (R-Okla.), a ranking member of the Senate Armed Services Committee, to give his approval.

After Sen. Inhofe and Republicans on the House Armed Services Committee initially raised concerns, a limit of $50 million was put on the transfer until the DoD provided details on how the money would be spent to address the crisis. Now, with plans to deploy 4,000 troops to the region, $750 million to fund a six-month mission has been approved by both the House Armed Services Committee and the Appropriations subcommittee. According to The Hill, however, a spokesperson from Inhofe’s office confirmed the Senator would not change his mind even in light of approval from other committees because the expense “would add demands on a defense budget already stretched thin.” The money would come from an account currently funding the war in Afghanistan.

There has already been one fatality from the virus in the US, heightening concerns that more could follow, and health officials are saying the epidemic in Africa is spiraling out of control. Last week a top US health official said the Ebola epidemic could have been contained and suggested sequester budget cuts disabled early response efforts. This week ranking members of the Congressional Subcommittee that oversees the budgets for the National Institutes of Health and The Centers for Control Disease and Prevention called for a hearing into the matter.

“The world is facing a severe global health crisis emanating from West Africa. The United States is stepping up to lead the international response to the Ebola outbreak and Congress will ensure that the President’s request is fully and quickly funded,” Appropriations subcommittee Chairman Rodney Frelinghuysen (R-N.J.) said in a statement.

Committemembers are hoping to convince Inhofe to change his mind:

“We understand that the administration has provided information to answer some questions that Sen. Inhofe had, and that they are hoping he will sign off soon so that they can go forward,” said a member of the Senate Armed Service Committee staff.