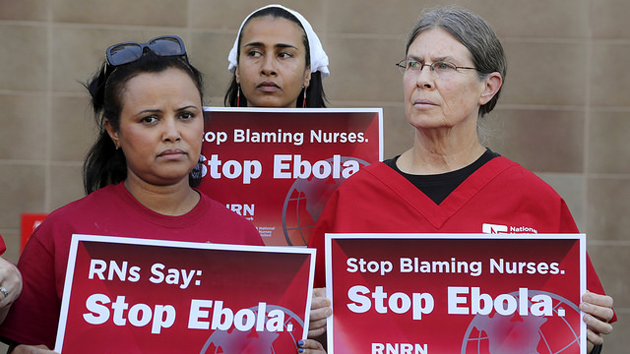 Update, October 15, 1:50 p.m. EDT: A second hospital worker who treated the Dallas Ebola patient has tested positive for the disease. Health officials have confirmed that prior to her diagnosis she boarded a flight from Cleveland to Dallas/Fort Worth on Frontier Airlines. The CDC is monitoring potential risk of exposure to 132 passengers aboard.

A new survey conducted by the National Nurses Union shows US hospitals may not be adequately prepared to handle Ebola patients, should the virus continue to spread. Out of the 2,200 nurses who responded to the union’s questionnaire, 85 percent reported that their hospitals had not provided education on Ebola. 76 percent said their institution had no policy for how to admit and handle patients potentially infected with the virus. More than a third claimed their hospitals didn’t have enough safety supplies, including eye protection and fluid resistant gowns.

The survey results were announced on Sunday, just after the Centers for Disease Control and Prevention confirmed that a health worker in Texas had tested positive for the virus. The CDC’s director, Thomas Frieden cited a “breach of protocol” as the likely reason.

“We have been surveying nurses for almost two months about Ebola preparedness,” Charles Idelson, an NNU spokesman, said Monday. “What these survey results clearly indicate is that hospitals are still not doing enough to be properly prepared to respond.”

The CDC has announced plans to deploy an Ebola response team “within hours” at any hospital where an Ebola patient is admitted. At a press conference, Frieden said the agency is responding to calls from hospitals that are underprepared to handle the crisis.

On Monday, Frieden said the the CDC is also working with hospitals to better train health workers on Ebola precautions.”We have to rethink the way we address Ebola infection control,” he said. For example, he said, in some cases health workers may actually be wearing too much protective gear, making it harder to remove and dispose of the material.

The NNU survey showed that, even as the CDC called for more hands-on training, especially on how to properly put on and remove safety equipment, few hospitals have provided it for their employees. Ideslson says most are simply pointing nurses to information on their websites, or linking to CDC information. Staffing is another concern, with 63 percent of nurses reporting that hospital facilities won’t adjust the number of assigned patients per nurse to reflect the additional time required to care for infectious patients.

“We are going to continue to protest the failure of so many of these hospitals to put adequate safety measures in place,” Idelson said; he wouldn’t rule out the potential for healthcare workers to walk out on strike, much as Liberian health care workers have.

The American Hospital Association, an organization that represents nearly 5,000 hospitals nationwide, is now calling on hospitals to bolster their training regimens, turned down my request for an interview, but sent a statement saying, “We strongly encourage all hospitals to conduct employee retraining on how to use personal protective equipment to protect themselves from Ebola and other potentially deadly communicable diseases.”

Even if hospitals are prepared, however, it can be difficult to comply with both patient needs and the social blowback that comes with an Ebola diagnosis. The New York Times reported yesterday that  Emory University Hospital in Atlanta, a center that had prepared for an outbreak long before the current crisis began, struggled with the county threatening to stop sewer service, couriers refusing to transport blood samples, and pizza delivery services refusing to come to any part of the hospital. And as my colleague Tim Murphy has reported, Louisiana’s attorney general has said the state, which processes a wide variety of hazardous wastes from around the nation, may take legal action to stop the incinerated belongings of deceased Ebola patient Eric Duncan from coming to one of its landfills.