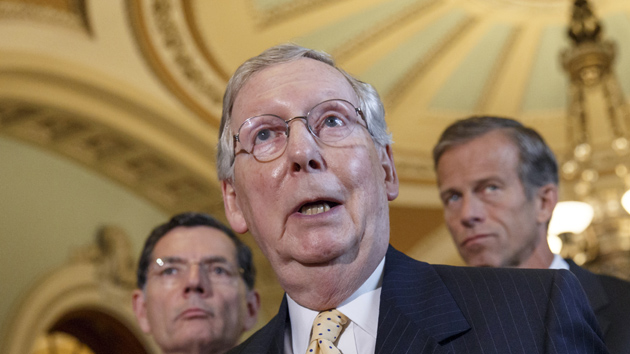 Many Ebola experts think that banning travel to the US from West Africa, where an outbreak of the deadly virus has killed thousands of people, would do more harm than good. The Centers for Disease Control and Prevention agree. But Sen. Mitch McConnell (R-Ky.) can’t seem to settle on a position. On Tuesday and Wednesday, he stumped both for a ban and for letting the experts decide—a flip-flop within 24 hours.*

In an interview with NBC News, McConnell was asked if he thought the US should ban flights from West Africa. “I’d leave that up to the CDC to determine what the techniques ought to be in trying to contain the disease,” he said. He added, “I think we ought to listen to what the CDC thinks they need either in terms of financing or certainly they’ll decide the procedures for travel and all the rest. I think we need to follow the advice of the experts who know how to fight scourges like this.”

Here’s video of the NBC interview:

But less than 24 hours later, McConnell abruptly changed course. Asked by a Kentucky TV station about containing Ebola, McConnell said the US needs to “do everything we can to try to contain the problem where it is.” He went on, “I’m not an expert on this, but it strikes me that it would be a good idea to discontinue flights into the United States from that part of the world.”

There are currently no direct flights from the Ebola-affected countries to the US, the New York Times’ Jonathan Weisman reported Friday.

Correction: The original version of this post stated that the NBC News and Kentucky interviews occurred on the same day.