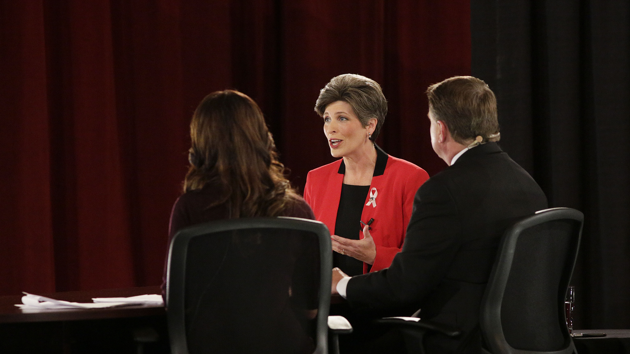 A lawsuit filed last week by a former GOP staffer in the Iowa state Senate claims that US Senate candidate Joni Ernst, a Republican, saw male colleagues sexually harass a female employee when Ernst served in the state Senate and “did and said” nothing to stop the abuse.

Kirsten Anderson, a former communications director for the Iowa Senate Republican Caucus, filed the lawsuit against the caucus on October 16. She claims that she was a victim of sexual harassment when she worked for the caucus and that when she complained to her superiors, she was fired. “By way of just one example, Sen. Joni Ernst of Red Oak and Sen. Sandra Greiner of Keota witnessed sexual innuendo and inappropriate behavior exhibited by their male colleagues and did and said nothing while female staffers stood by unable to say anything,” the suit alleges.

The lawsuit mentions Ernst just once, and Anderson does not name Ernst, who is a member of the caucus, as a defendant. But Democrats in Iowa, where Ernst is in an extremely tight race against Democratic candidate Bruce Braley, have seized on the allegation in the final weeks of the campaign.

In a statement sent to reporters, Ernst denied that she had witnessed sexual harassment in the Legislature, adding, “As a former colleague, I hope [Anderson] is not being exploited ahead of the election.” A spokeswoman for Ernst called Anderson’s lawsuit “an obvious effort by Bruce Braley to smear Joni Ernst two weeks before the election.”

Three prominent Iowa Democrats pounced on those remarks at a news conference organized by a consulting firm with ties to Braley’s campaign.

“Rather than express concern for a young woman who worked under her, she immediately attempted to impugn the integrity and motivation of that young woman.”

“Rather than express concern for a young woman who worked under her, she immediately attempted to impugn the integrity and motivation of that young woman,” Bonnie Campbell, the former attorney general of Iowa, said at the conference. “This is, in the world we inhabit, classic blaming the victim. I think the most offensive thing is the suggestion that this young woman, who has done something very courageous…was politically motivated by secret outsiders and that she didn’t have either the intellect or the integrity to make her own decision about whether to file such a very serious lawsuit.”

“I’m a supporter of Bruce Braley, but that wasn’t my motivation,” Campbell told Mother Jones, explaining her role in orchestrating the press conference. “I said what I said because Ernst’s record is really bad on women’s issues and I don’t want her to win this election.”

Michael J. Carroll, Anderson’s attorney, denied that there are political motivations to the lawsuit or the timing. “We were on a deadline,” Carroll tells Mother Jones. “We had to file the lawsuit by October 29 or we forever lost the right to do so…You could say, well why didn’t we file it earlier? That only would have given the candidates and campaigns more time to make something out of it.”

“While the lawsuit mentions state Sen. Ernst, it also mentions many other state senators, including Democratic senators,” Carroll continues. “It had no political angle at all. It was a purely factual statement about who had seen or heard or experienced or did certain things in their ordinary jobs as state senators. That’s it.”

Her suit echoes claims that she made to the press and the Iowa Civil Rights Commission after she was fired in May 2013. At that time, Anderson said that she had overhead a GOP staffer make an explicit comment about the perceived sexual orientation of the Senate clerk and that a Republican state senator had made sexual comments to her.

“[This] is not about public embarrassment. My goal is to change the work environment at the Capitol.”

A spokesman for the state Senate Republicans declined to comment to Mother Jones.

Braley and Ernst have gone back and forth on the subject of sexual harassment before as both vie for support from female voters. (A recent poll shows Braley winning women by double digits.) Ernst made headlines in August after she told Time that during her time in the military, “I had comments, passes, things like that.” She added, “These were some things where I was able to say stop and it simply stopped but there are other circumstances both for women and for men where they don’t stop and they may be afraid to report it.” In another interview, Ernst promised to combat sexual assault in the military, if elected.

Shortly after those interviews, Democratic operatives privately circulated an account of how Ernst had investigated a 2004 sexual-assault allegation made by a soldier under her command when she was a captain in the Iowa National Guard—and alleged she had “covered up” the incident.

Military records obtained by the Register showed that the female soldier under Ernst’s command had not been consistent in her account of the alleged assault and that several eyewitnesses contradicted her initial story. A psychiatrist treating the female soldier, however, concluded that she “exhibited common symptoms of someone who had experienced a rape.” Ernst and other investigating officers concluded that the soldier’s claims were unfounded. Ernst punished the male soldier accused of sexual assault for an alcohol violation he admitted during the investigation.

In response to Democrats’ criticism about Ernst’s role in this episode, her campaign asked a former judge advocate general at Patton Boggs, a white-shoe DC law firm, to review the case. Maj. General Mike Nardotti concluded that Ernst acted properly.