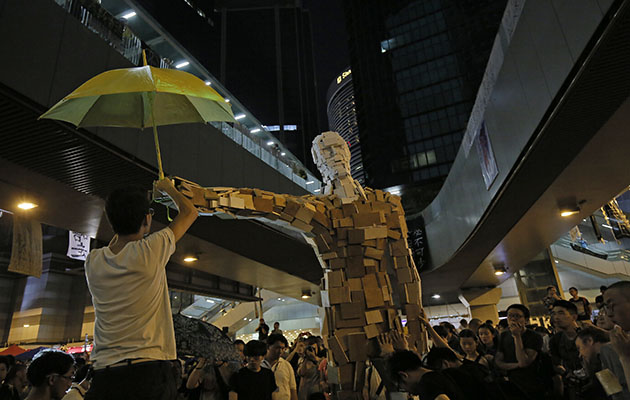 But according to reports, protestors remain divided, with many still rejecting plans to concede.

240 am HK and the main protest site in central is still busy. #OccupyHK #HKStudentStrike pic.twitter.com/D3nYbXRzFw

Late into the night, about 200 protestors were still present in front of Chief Executive Leung Chun-ying’s office. Some cars were allowed through, including one ambulance that was inspected to ensure no tear-gas cannisters were being carried inside.

Protestors, who are demanding for Leung to step down and to be allowed free elections in 2017, are largely hoping to avoid violent confrontations with police come Monday morning.

“If the government uses force to clear away protesters, there will be no room for dialogue,” Lester Shum told reporters, according to the AP.

But Leung warned he was ready to “take all necessary actions to restore social order” and allow roughly 3,000 civil servants return to work.

Update: By Monday, most of the city returned to work with only a few schools remaining closed. However, barricades and protestors were still present and traffic was snarled throughout. It is unclear if concrete negotiations with the government have been solidified. On achieving their primary goals, one student leader said, “I think it was possible, but now I don’t think so because they (the Hong Kong government) don’t give any response and China is also very much against this.”

A high school student makes her way to school passed thousands of messages of support for demonstration #OccupyHK pic.twitter.com/qI2SBZDY9y