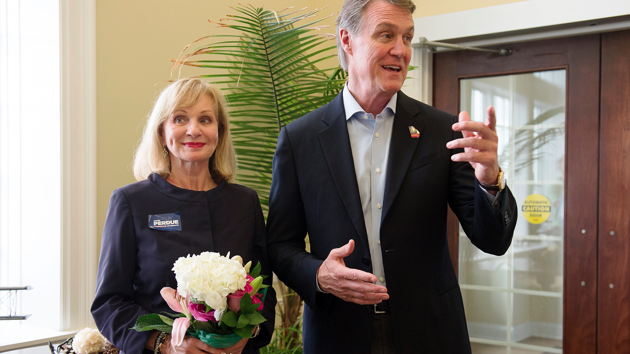 David Perdue, the Republican nominee for Senate in Georgia, has a lady problem—at least according to recent polls, which show Democrat Michelle Nunn ahead with women voters in this toss-up election.

In a Sunday night debate between Perdue and Nunn, the moderator suggested that ads about Perdue’s time as the CEO of Dollar General, a discount chain, had damaged the GOPer’s campaign. Shortly after Perdue stepped down as Dollar General’s CEO, hundreds of female managers sued the company for pay discrimination that allegedly took place during Perdue’s tenure. Nunn’s campaign and EMILY’s List have both aired millions of dollars’ worth of negative ads describing the class-action lawsuit. The moderator urged Perdue: “Talk to those women in particular.”

Here’s how Perdue responded: “If you look at Dollar General as an example, there was no wrongdoing there,” he said. “That lawsuit, or that claim, or that complaint was settled five years after I had left…And it was less than 2,000 people. We had upwards of 70,000 employees in that company.”

An annual report Dollar General submitted to the Securities and Exchange Commission puts the actual number of female managers in that class action at 2,100. As Mother Jones reported in May, the women had been paid less than their male peers between the dates of November 30, 2004 and November 30, 2007—almost exactly the dates that Perdue was CEO (from April 2003 to summer 2007.) The class action began in late 2007, and Dollar General settled the lawsuit for $18.75 million without admitting to discrimination.

“Two thousand women, that actually seems like quite a lot to me,” Nunn said at the debate.