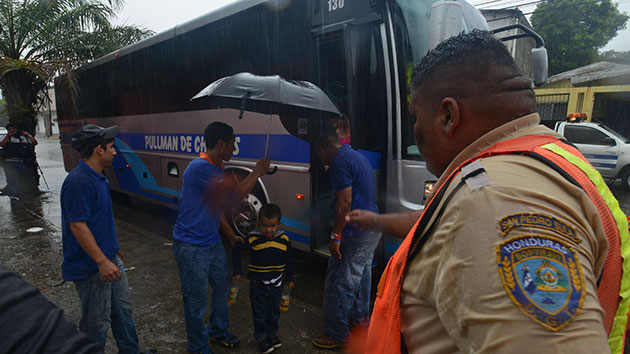 A boy steps out of a bus full of families deported from Mexico back to Honduras in July of this year. Miguel Juarez Lugo/ZUMA Press

Escaping rampant violence in parts of Central America, tens of thousands of child migrants made a treacherous journey up to the United States border this year. To help dissuade such a vulnerable population from taking such risky treks in the first place, President Obama announced Tuesday that he plans to roll out a new program to allow children to apply for refugee status from their home countries of El Salvador, Guatemala, and Honduras.

The program is still in the planning stages, and it remains unclear how old the kids must be and what circumstances they must be caught in to successfully apply for asylum. But at least it’s a move in the right direction, says Michelle Brané of the Women’s Refugee Commission. “They are laying the groundwork and designating an avenue—it’s a good starting off point,” she says.

“That’s not even close to enough. We saw 60,000 kids arrive from Central America this year.”

White House spokesperson Shawn Turner told the New York Times that the initiative is meant to “provide a safe, legal, and orderly alternative to the dangerous journey children are currently taking to join relatives in the United States.” The point made in the last part of this statement has caught the attention of human rights advocates including Brané, as it suggests that only children who already have a relative in the US will qualify for asylum under this new program, leaving out thousands who are trying to escape newly developing unrest and gang violence.

Advocates also worry about the number of applicants that will be granted asylum. The White House’s announcement projects that 4,000 people total from Latin America and the Caribbean could be granted refugee visas in fiscal year 2015. (Let’s not forget that region includes troubled countries like Cuba, Venezuela, and Haiti). The children who would be allowed to apply for refugee status from their home countries appear to be a subcategory of that 4,000. “That’s not even close to enough,” says Brané. “We saw 60,000 kids arrive from Central America this year.”

“Kids have a threat against their lives. They don’t have time to stand in line, file an application, come back later, stand in line again. They have to leave immediately.”

One study by the UN High Commissioner of Refugees revealed that 60 percent of recent child migrants interviewed expressed a targeted fear, like a death threat, which is the type of experience that can qualify you for asylum. If you use that statistic, that means 36,000 of the kids who crossed the border this year should qualify for refugee visas—nine times the total number Obama is promising.

But Brané says an even bigger concern with the program is its potential to eclipse or replace protections given to targeted migrants who arrive at the Mexico/US border. “A program like this is fine as a complementary approach,” she says, “but it cannot replace protection at the border; it should not impede access to asylum in the US.” Ironically, it’s the children whose lives are most threatened that could have the hardest time applying for refugee status from their home countries. “In some of these cases, kids have a threat against their lives,” says Brané. “They don’t have time to stand in line, file an application, come back later, stand in line again. They have to leave immediately.”