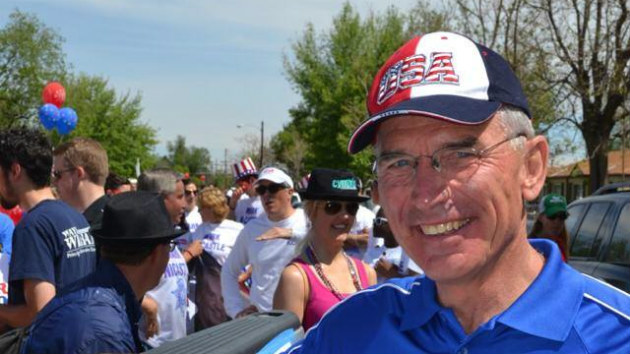 In an interview aired Wednesday on Colorado Public Radio, Beauprez, a former congressman, struck a decidedly pro-choice note when asked about abortion and birth control. He said he would not stand in the way of women having access to abortions, nor would he interfere with women choosing what kind of birth control to use. “I respect people’s opinion, women’s right to that choice,” he said. He later added, “I don’t want to run somebody else’s family and make decisions for their family, their life; I want them to have the opportunity and the freedom to do that themselves.”

Here’s the full exchange (listen to the audio above):

CPR: On women’s reproductive health, as governor would you be committed to your current stated position that while you’re personally against abortions, you won’t stand in the way of people having access to them or letting women choose their preferred method of birth control?

I respect people’s right to choose. I live my life the way I personally choose, but I’m not going to interfere with somebody else’s. The job of a governor is less to govern the people, and more to govern the government. I don’t want to make somebody else’s decision, but I want them to have every opportunity to make their own. I don’t want to run somebody else’s family and make decisions for their family, their life; I want them to have the opportunity and the freedom to do that themselves. That’s the kind of governor I’ll be.

Right to that choice…have the choice…right to choose…the way I choose: Beauprez almost sounds like a Planned Parenthood activist. But his legislative record and past statements couldn’t be more at odds with his seemingly pro-choice comments.

In 2005, then-Rep. Beauprez cosponsored the Right to Life Act, a measure that guaranteed “equal protection for the right to life of each born and pre-born human person.” The bill defined life beginning with “the moment of fertilization,” and could severely restrict abortions. In Colorado Right-to-Life’s 2006 voter guide, he said he supported a constitutional amendment to “restore full protection to pre-born human beings.” That same year, he asserted—incorrectly—that the abortion rate for black women was an “appalling” 70 percent. (The actual rate at the time, according to the Guttmacher Institute, was 49 per 1,000—or 4.9 percent.) And in 2013, in a column on TownHall.com, he urged all Americans to reconcile the “tragedies” of abortions just as they reconciled the mass shootings in Aurora, Colorado, and Newtown, Connecticut.

As a gubernatorial candidate, Beauprez has not wavered from his decidedly anti-abortion position. He continues to say that he opposes all forms of abortion, even in cases of rape and incest unless the mother’s life is at risk. He bragged to an interviewer in March about his “100 percent pro-life voting record.” He also claims that an IUD is an abortifacient, not contraception. Beauprez has not said how he’d act on these beliefs, though he says he would eliminate all state funding for Planned Parenthood.

But anyone listening to his recent Colorado Public Radio interview might think that Beauprez was a supporter of a woman’s right to choose, just as Scott Walker and Scott Brown sought to imply in their own sneaky ads on the issue. Pro-choice women are a key voting bloc that Beauprez needs to win—and he appears willing to distort his record to get their votes.